On my stroll home with coffee today I was greeted by a paving truck and steamroller right in front of our house. I figured the city had finally sent a crew out to fix the gaping sinkhole in the street whose maw was slowly enlarging from Vespa-sized to VW Bug-sized. But no. They were there to pave over a small correction to a manhole.

All three of my kids (in pajamas) ran out to see Men Working With Construction Equipment and we had ourselves a little morning entertainment. Over the clamor, I gestured towards the sinkhole to the crew in the international sign language of “Um, you aren’t going to repair that obvious hazard?” They ignored me. So we brought them some bottles of Propel. The foremen yelled back “You didn’t see nothin’ here” and proceeded to back the dumptruck up to the hole and fill it in. Now, of course, there’s a structural problem under the street. The hole will simply degrade over time and suck in the new asphalt. But, hey, it is fixed for now with no extra bitching to the city to get it done.

This is how things are done in this city. Not saying it is right, just how it is. But I can imagine worse ways of getting things done.

This episode reminded me of a similar, though much more exciting, street scene from a few years back. I blogged it on another, private site, but copy it here for your pleasure.

Boys like trucks. Especially when it is a garbage truck on fire that is being doused by a fire truck right in front of our house. Oh the joy! My son and I were returning from breakfast and saw a garbage truck — in fact our garbage truck with our garbage men on it — with smoke pouring out of the back. A fire engine had just pulled up and the crew was unravelling the water hoses. Luckily this was right at the bar three houses down from us so we perched on the sidewalk bench and got a front row seat to a spectacle way cooler than anything we could have Tivo’ed. 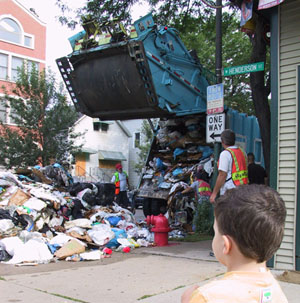 But it got better. They started hosing down the truck, but seemingly could not find the source of the fire. What to do? Dump the entire load of trash on the street of course! YES! My son’s eyes were platter-sized as it all came crashing onto our street in a soaking, stanky, smouldering heap. This necessitated opening the fire hydrants. I think we might have applauded. You just can’t describe the feeling of watching smoking refuse wash down the gutter of your own street. They really started hosing the pile off and it seemed to work.

The best part was the coming together of such a fine group of Chicago Guyz. Firemen, Policemen, Garbagemen, and other city officials with no real role congregated and shot the breeze like this was an everyday occurence which, perhaps, it is. You just wanted to grab your crotch and say “fuck” watching these guys do their jobs.

To top it all off, one of the firemen beckoned my son to approach the Engine. Nevermind that there was still a fire in the middle of our street. Engineer Joe plopped hime in the driver’s seat of the truck. I was as happy as my boy was. Driving a fire truck is simply cool.

The only thing that would have made it even better is if a “scoop” — those of you with children who watch Bob the Builder will know what this is — arrived to clean up the crud. In fact after we took my son to camp, a scoop did arrive. Thelovelywife noted at the time that given the number of Union-mandated coffee and cig breaks for the city workers he might well make it home in time to see the scooping.