I’m in Accra, Ghana now, back where this adventure started last week. It’s been wonderful and exciting, exhausting and not a little frightening. Let me provide an example that covers a single twenty-four hour period last week.

We have a “handler” named Asha. She works for Citizens Development Corps, which is based out of Accra, so she’s our only daily contact in Kumasi. Asha’s great: 23, urbane, well-educated, and a serious party girl. (I’ve nicknamed her “Brimful”, a reference she both likes and gets.) We talk music.

Asha has a friend who owns a club in Kumasi. I believe I found that fact out approximately 100 seconds before she had him on the phone and had procured an invitation for me to DJ there. So, last Thursday, not even a week in Ghana, I hauled my laptop over to Time Out for a truly impromptu set. (OK, it wasn’t the least prepared I have ever been, but it was close.)

Apart from having no Nigerian music on hand — whoops — and some uppity patrons miffed that karaoke night was being upstaged by an obruni (Twi: “whitey”), it was pure joy.

I started with standard (even clichéd) Western tunes, quickly sprinted to more contemporary beats, veered over to Adam Beyer and Talvin Singh, did my best not to maul a bunch of Ghanaian High Life music I have, then ended with a long set of trance to placate the Tiësto-craving Lebanese who were crawling all over the plexiglass in front of the booth.

In short it was an amazing high. The club owner woke me up with a phone call at 7 the next morning to ask me if I would do it again. Quite a compliment, despite the hangover from the free (hooch) gin he paid me in.

And now a photo interlude. I just love the gazes of these kids. 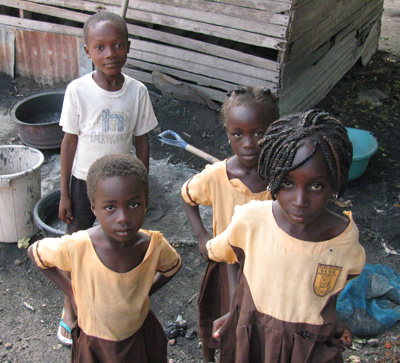 The next day was a bit different. We were criss-crossing Kumasi on our way out of town to visit villages where traditional handicrafts are created. Talking to artisans and observing their trade in action was the first part of our task here (much more on which in a future post). It was thrilling.

As we were heading back into town for lunch our two Ghanaian colleagues in the front seat gasped and slowed the card down. Now, readers who have been to Ghana will know that no Ghanaian motorist ever gasps, blinks, slows down or really even cares. It is a massive deathrace free-for-all on the streets — a fact made laughable by the cheery Christian slogans painted on the back of nearly every car.

But gasp they did. Lying in the median of the street on the left side of our car, right outside my rolled-down window, was the dismembered corpse of a human being. It was a man. At first I thought it was a car crash victim, but as I looked closer I realized that he had been hacked with a long blade. It was perfectly obvious and completely nauseating, reminding me instantly of the way a roadside vendor had opened up a coconut for us the day before. The dead man’s head was flayed open from numerous machete blows.

But there was no blood on the street. This person had been murdered elsewhere, mutilated, and put out on show. A lynching. We pulled away and for several minutes the whole car was silent. I was shaking. Finally we tried to ask our hosts what in the hell we had just seen. They were upset too, though it was hard to tell exactly why.

They explained that crime was on the rise in the Ashanti region and that people were becoming increasingly unhappy with the sentences delivered by the court system. As such, vigilante murders were becoming more and more common as angry mobs sought to punish and deter crime. Obviously our hosts had no idea what crime this guy had committed — if he had done so at all — but that was their answer: vigilantism.

Fair to say that little episode annihilated any high I was riding from DJing the night before. I couldn’t shake the image, wished I hadn’t stared. We did little work the rest of the day that required lots of talking. No one really wanted to interact. That night none of us could sleep.

I suppose there’s an upside to being shaken so deeply. I’m much more sober about Ghana now. It’s still a wonderful and special place, but I think I can evaluate it more objectively now. The senseless horror of that corpse in the street (with children playing around!) pretty firmly knocked off the rose-colored glasses I had on.

In between these two poles of emotion are ten days of fantastic new experiences. I’ve uploaded all the photos to date and as much video as this poor bandwidth can handle. Here’s the full set, updated nearly daily.

Bear with me as I’ve not properly tagged or annotated most images yet (and some of them really require explanation). Also, most photos have no high-res version. Just too bandwidth-scarce over here. Will replace them when I am back home.

Stay tuned for a multi-part series on the visiting the artisan villages and documenting their work. Amazing stuff comin’.