The kind of Innovation Chicago is

The economist Edward Glaeser has called Chicago “a city built upon corn in porcine form”. He’s referring to the city’s remarkable 19th century transmutation of the natural bounty of prairie agriculture into a higher value form of commerce, pigs. The innovation necessary for the cold storage and transportation of which would help Chicago become the central node in a nation-spanning rail network. It was the beginning of greatness.

We can effect this transformation again. Our natural bounty today is data, knowledge, and ideas — their “form” the establishment of new businesses and a more livable Chicago. 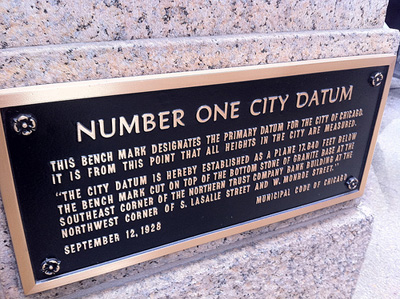 Standard for height measurement in Chicago, NW corner of LaSalle and Monroe.

Today Chicago gets a new mayor and a new administration. I’m proud to be its Chief Technology Officer, a role I took for a single, simple reason. For the last three years I have traveled the world consulting with cities on strategies for making them smarter, more efficient, and more responsive to citizens. Many of these talks and projects were fruitful, but none of them mattered to me personally. None of them, in short, mattered to the city I love most.

The coming of the web, you may recall, was cause for all kinds of pronouncements that we’d move away from each other, tied only by network communications, happily introverted in electronic cocoons. This has not happened (indeed the reverse is happening). If anything the ubiquity of network technologies has proven that place matters. Mobile computing and “checking-in”-style apps are ascendant because we are creatures of place. And my place, the place of four generations of my family, is Chicago. It’s time to focus my effort here.

The transition report published last week is a roadmap for the change the Emanuel administration will undertake. All of the initiatives are exciting and important, but one speaks directly to remaking Chicago as a hub of information that leads to insight and growth.

Why do this?
Without access to information, Chicagoans cannot effectively find services, build businesses, or understand how well City government is performing and hold it accountable for results.

How will we do this?
The City will post on-line and in easy-to-use formats the information that Chicagoans need most. For example, complete budget documents – currently only retrievable as massive PDF documents – will be available in straightforward and searchable formats. The City’s web site will allow anyone to track and find information on lobbyists and what they are lobbying for as well as which government officials they have lobbied. The City will out-perform the requirements of the Freedom of Information Act and publicly report delays and denials in providing access to public records.

The City will also place on-line information about permitting, zoning, and business licenses, including status of applications and requests. And Chicagoans will be asked to participate in Open311, an easy and transparent means for all residents to submit and monitor service requests, such as potholes and broken street lights. Chicagoans will be invited to develop their own “apps” to interpret and use City data in ways that most help the public.

Participatory government isn’t the only use of the wealth of information the city can publish. We intend data-driven decision-making, powered by deep analytics of our services and city vital signs, to be central to the day-to-day business of running Chicago. 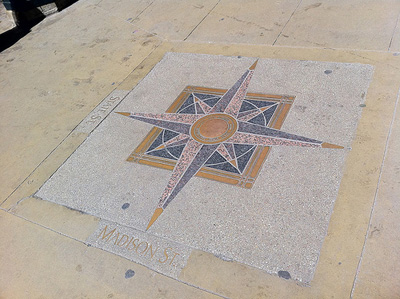 0,0 on the X-Y axis that is the Chicago street grid. Madison and State.

A data-centric philosophy is more than transparency and efficiency, too. It is about fostering innovation. Business is built on local resources. Where once we transformed grain into pigs into commodities, we can now provide data that serves as a kind of raw material for new business and new markets.

(One example of this — and proof that the talent to do great things is right here, right now — is the design of a “smart intersection” by the students from George Aye’s Living In A Smart City class at the School of the Art Institute this semester.)

There’s plenty more in store for technology to assist in Chicago’s growth and livability. It’s suffused throughout the transition report: promoting entrepreneurship, increasing access to broadband, treating the street as a platform for interaction itself (more of which on all these in future posts). But the foundation is data. Access is an important first step, followed quickly by the tools and policies for taking action on it. 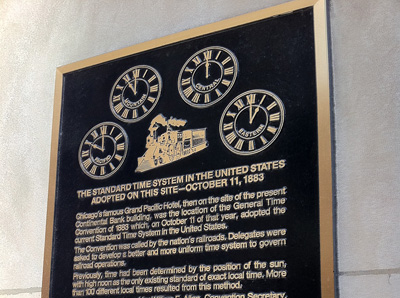 A network of moving things prompts the establishment of a national standard time.

Chicago knows how to do all this. We’ve been doing it for over a century. We have the talent in the private sector, in academia, and in our non-profits to capitalize on any impetus city government can give. Let’s get going.