Of orphans, the dead, and a house on a street that does not exist

Last weekend the boys and I set off on the last major pre-Italy fact-gathering adventure. Actually it was kinda morbid or, at least, odd for a five- and three-year-old. The goal was to visit my great-grandparents’ residence in Little Italy, the cemetery where they are buried, and the orphanage where my grandfather grew up. Why? Not entirely sure. Not a lot of facts to be gathered at these places frankly. I guess I just had to see.

We started in the massive, mostly-Italian cemetery of Our Lady of Mount Carmel. It is a Roman phonebook written in weathered stone.

We hunted around the graves with a crappy map. It was sweltering. And we were being pummeled by sex-crazed cicadas. But the boys were troopers. Nathan said “So, Dad. Everybody’s dead here?”

“Why are they in the ground?”

Didn’t have a great answer for that one.

We got the map in the sprawling mausoleum which really freaked out the boys. Except occasionally for soft strains of angelic choirs coming from somewhere it was supernaturally quite — a situation my children have never experienced. Also the smell. Not quite rancid, but certainly not right. We got outta there quickly. 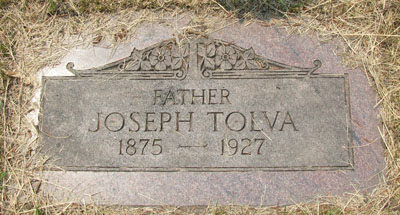 Back to the grave hunt. Basically Giuseppe Tolva doesn’t have a very elaborate grave, which is why it took us forever to find it. Most graves have upright markers and are visible from the cemetery roads, but his is flat with the ground all the way in the back of the vertical tombstones. I’d love to know who paid to inter him here and even more to know who put the artificial flower on the headstone. Interestingly there is no marker for his mistress nearby as we were led to believe. Just a joint grave for his two daughters.

The heat and bug assault was too much so we had to cut our hunt short for Grace, his wife. We decamped for Maryville Academy, the orphanage my grandfather grew up in when Grace died in childbirth with his brother. Frankly it was more depressing than the graveyard and even harder to grasp for my kids than the corpses in the ground.

“You mean the kids here have no parents? Why not?”

“Well some of them are dead and in the ground.”

The boys’ eyes enlarge to the size of silver dollars.

Actually Maryville isn’t an orphanage anymore. It serves physically, sexually and emotionally abused and neglected children. The old building, the beloved home of my grandfather (he maintained a relationship with the staff there all his life), is in sorry shape. It looks a bit like a dilapidated southern plantation house. The heat and cicadas made it feel all the more so. But still it felt like it could have been a good place for my grandfather. You’d not have been surprised to turn a corner and see this Maryville scene on a park bench. (Photo of my great-grandfather, great-uncle, and great-aunt circa 1920.) 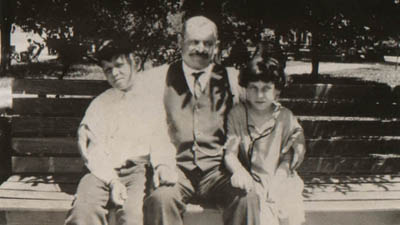 Back into the city with two very tired boys. The heat-spawned rain was starting to fall as we headed into Little Italy. I had recently found Giuseppe’s World War I draft registration card which contained an important (and unknown) reference to his residence at the time: 908 Sholto. It was in his own scrawl so I figured I was reading it wrong. Never heard of such a street in Chicago. So I found a list of all the streets. Nope, no Sholto. Great, doesn’t exist. Or maybe the UIC construction in the 1960’s destroyed it? Turns out, the street had only been renamed. 908 Sholto is actually 908 S. Carpenter. 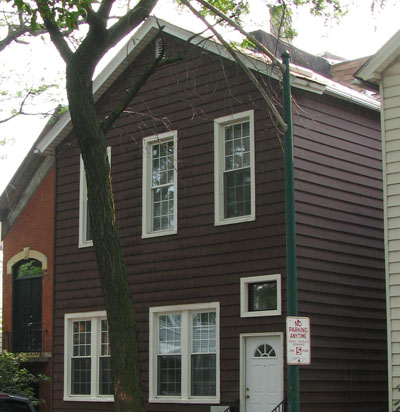 The kids had fallen asleep in the car by this point. It was pouring rain and I was prowling around the east edge of Little Italy looking a little suspicious. I’m pretty sure the home at 908 S. Carpenter is not the same one Giuseppe and Grazia lived in, but you never know. There are plenty of buildings that have stood that long. I have to believe they were crammed in there with other immigrants.

Yep, I guess I just had to see.