The National Museum of African American History and Culture

It doesn’t have a building and it doesn’t have a collection*, but today the newest museum in the Smithsonian family is open to the public on the web. The National Museum of African American History and Culture’s Museum on the Web is the first cultural institution that I know of to fully embrace the bottom-up contributions of web-users in an effort to populate itself with stories, photos, and media, oral-history style.

This functionality, called the Memory Book, permits site visitors to compose and upload their own “memories” about anything having to do with the African American experience. The posts can be tagged and are plopped into a visualized web of topics and other memories, forming what is hoped over time will become a rich, dense tapestry of interconnected stories. The Memory Book also contains the bulk of the museum’s material on the major figures and events in African American history. You can for instance, tag your memory “civil rights” and see it enmeshed in the same web of relations of the major figures relating to the movement. 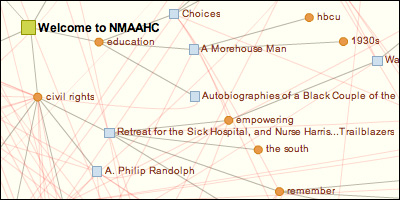 There is some great stuff in there. Here’s a taste of one of the entries called Negro Girl Changes the Color of Classrooms:

I was four years old. The youngest of seven children. I could not read. But I could watch TV. Seeing my big sister on TV made me know she was either a movie star or she was in BIG trouble. Years later, I learned it was a little of both.

Hooray intangible culture and compelling storytelling. And double hooray for the museum’s small staff for truly embracing the concept of a museum for the people, by the people.

This is the latest project by IBM in the cultural space, my first major launch for an institution in the United States. (And my first project built on Ruby on Rails.) I’m proud of the accomplishment and exceptionally so of my team.

The Washington Post has a short story on the Museum on the Web.

UPDATE: a bit of local flavor in the Chicago Tribune and the official write-up at IBM.