Rave to the grave

So last night, mid-Zombiefest, my brother got a text message from a bar that he DJ’s at saying that the replacement DJ was awful: “He’s playing ‘let’s talk about sex, baby’ get over here now”. The bar manager needed an emergency DJ, stat.

We deliberated. Neither of us had anything set up for such a thing, we were in the midst of chronicling the undead, and had been drinking since 3pm. Oh, we were also wearing zombie masks. We didn’t deliberate long. 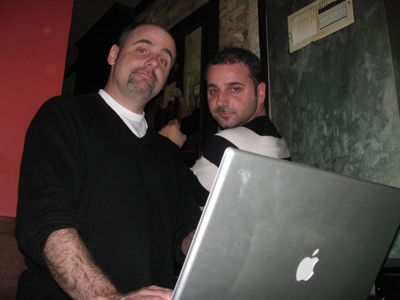 The DJ at the bar was none too pleased to be getting the hook. That’s what you get for playing George Michael to a bar full of twenty-somethings, buddy.

In our rush out of the house we forgot headphones. Let me suggest that this is a rather vital omission when attempting to play music. Cueing was, you know, impossible. It was all completely impromptu without a matched beat to be heard. But it was damn fun. Just back and forth musical one-upsmanship, echoes of Christmas Party.

In many ways a bar full of drunken patrons is not all that different from an assault of the living dead. Single-minded of purpose, responding only to the crudest instincts, lurching from prey to prey.* Yep, a Friday night bar scene.

The bar manager begged us not to put the zombie masks on. Inexplicably, we did not play Thriller.

The crowd was odd. The manager said they wanted 80’s and 90’s stuff. OK, can do. But every request that came in (none written on cocktail napkins, alas) was for hip hop, perhaps the most under-represented genre in my library. I mean, I have a good bit, but that’s not the point. I probably didn’t win the bar repeat customers by being a complete ass about music I didn’t want to play. Thankfully we had our pal Chris with us and after a while I just pointed to him as the designated request-taker when someone would approach. Shoulda been wearing this.

The bar wants us back tonight. The undead filmfest has resumed and we’re properly organizing tunes for the eve. I’m taking requests online only, so get yours in now.

* This is, in fact, the actual premise of Return of the Living Dead 5: Rave to the Grave, the inability to distinguish drug-addled revelers from brain-craving corpses. Tom Petty knows.

One response to “Rave to the grave”