Lessons from Zombiefest, Part the First

Gather ’round, members of the living. You are about to become educated on the finer points of the undead film genre.

A while back my brother and I watched every film begotten (and misbegotten) from Romero’s classic Night of the Living Dead — 16, plus one trailer.

That’s right. We’ve done the hard work so you don’t have to. 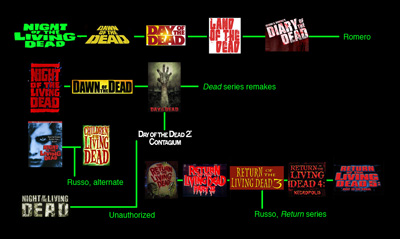 Zombie films almost always contrast human incompetence, ignorance, or incompatibility with the external threat of the revenant hordes. Which is to say, humans nearly always screw themselves worse than the zombies do. Zombies are not stalkers or serial killers. They frighten because they are single-minded and unstoppable — unstoppable because of quantity rather than invulnerability. Like a virus. In fact, substitute viruses for the undead and you basically have the same movie.

Even so, fear of the undead usually stands for something else. It’s always the fear of others, a group that shifts with mainstream society’s notion of norms. So, for instance, it has been argued that Night of the Living Dead‘s zombies represent drug-addled hippies, out of their minds and focused on getting their fix. It was 1968, after all. That symbolism is debatable — and it gets a lot more complex, though no less true, when the zombies become somewhat sympathetic in later films — but it is clear that Romero at least always tries to depict the pitched battle of humans vs. undead as something more than just that.

A note for the true fan, there are spoilers below because, well, all zombies spoil eventually. Also, some of the clips are gory, duh.

We watched the films based on release date, but they are here grouped according to main series and remakes.

Lastly, please forgive the stylistic schizophrenia of the write-ups. That’s what you get when you mix a collaborative spreadsheet and several personal kegs of beer over a weekend of sedentary film-viewing.

The granddaddy, near perfect. Black-and-white. Zombies are not slow, mindless or lumbering. They are the living recently-dead, not rotting corpses. Some even use tools to kill. (Joey: “That may be the most un-zombielike thing I have ever seen.”) No crawling out of the grave. Some confusion about whether they can be killed in any way that a human can be or if you have to shoot them in the head (which becomes the standard later on). Seems they cannot “infect” the living. Mention of a Venus satellite coming back to Earth and starting the “epidemic”. Mr. Cooper is a dead ringer for Rob Corddry. Odd fixation on taxidermy. Little girl zombie confronting her parents as disturbing now as it surely must have been in 1968. Lead character is a black man, unusual for 1968. He never gets it from the zombies but is killed in the end (mistakenly?) by a group of rescuers that looks exactly like a lynch mob. Best quote: “They’re coming to get you, Bahr-bah-rah.”

One of the reasons that Night spawned so many remakes and derivatives is that it has lapsed into the public domain. As such the entire thing is online for your viewing pleasure.

Hard to argue with a movie whose setting is the locus of the real undead in America: the suburban shopping mall. This continuation is conceptually brilliant, but executed not as well as the original. Possibly influenced by Network (released two years earlier), the film starts in a TV edit suite broadcasting news of the sprawling zombie epidemic. (Interesting flipside to the always-on TV in the first film, basically a character unto itself. At one point in Night someone justifies his actions by saying “Well, the television told us to.”) Action shifts to a mall where a small band of survivors takes refuge from the madding crowd, a consumerist utopia vs. unstructured lust (the urban street, natch). The agent of zombification is now officially viral. The voice of reason, again, is a black man. Firsts: Tom Savini (make-up effects auteur) cameos as a biker; disembowelment; helicopter scalping; obese zombie (rare!). Also, entire biker gang is drinking High Life, which in itself merits applause.

Here’s Savini fending off the shoppers, er, zombies and coming to his own end.

An undead movie with a message. That sucks. Or rather, doesn’t live up to the Romero standard, which disappoints all the more. (For true suckage, we must wait for a few remakes, coming in future post installaments.) So, the outbreak is basically worldwide, lots of shots of overrun cities. A group of scientists and military folk hole up in a vast underground bunker. The scientists are running experiments on captured, shackled zombies because, you see, even zombies have feelings. Bud, the only zombie in any Romero flick that speaks a line, is the central figure. Behind him is this weird three cross motif on the wall. What is he, the messiah? The whole thing is paced through rubber cement, e.g. the first kill (of a zombie, no less) is 58 minutes into the film. The brainy scientists vs. brawny military disagreements tire after, oh, the first one. In the end, it’s too much preach, not enough gore. One of the sensitive humans says “How can we set an example for them if we act like barbarians ourselves?” Gag.

Here’s an unchained Bub actually shooting (and saluting) the head military guy, who is then gang-dismembered.

Twenty years separate this from Day and thank god for that. This is a great movie. The world is completely overrun with the undead. Uninfected humans are barricaded in walled urban centers (hello Baghdad Green Zone!); there’s something of a comfortable equilibrium. Frequent sorties for supplies are undertaken outside the city in a heavily-armored truck-tank that can mow down zombies and distract them with fireworks (“sky flowers”). The twist is that the undead are beginning to remember things, are getting smarter, acting braver. Oh, also they learn to swim. There’s a bit of a zombies-are-people-too vibe which annoys and I’m no great fan of zombies seeking revenge (meaning they are compelled by more than just a hunger for flesh, boo), but overall this is one great flick. Dennis Hopper and John Leguizamo are fantastic.

Here’s the original, unreleased trailer that integrates some footage from the first three movies, plus the creepy quote from Night.

Stay tuned for the next riveting installment of the undead marathon recap. And for god’s sake aim for the head.

One response to “Lessons from Zombiefest, Part the First”