I am dying to write in-depth about the Forbidden City virtual world project I’ve been helming for the last few years. Alas, that must wait for the launch itself.* But. We can talk about it obliquely, no?

There’s a scene** in the Virtual Forbidden City in which a painter sits in a garden with the imperial family, painting away. It’s a simple thing, really, but I find it immensely thought-provoking. As a visitor you’re an unseen spectator of the painted depiction of a moment in a world which is itself the depiction of a moment of daily life in a virtual milieu. A snapshot (which your avatar can take) would reveal a recursive scene-within-a-scene or, in the lingo of the art world, a mise en abyme — a technique used for centuries in all manner of paintings, woodcuts, and tapestries.

This got me wondering if there is any historical analog to the depiction of artists themselves inside the frame of the same scene they are painting. Cursory searching and lazytweeting yielded no actual term for such a composition, but in fact there are precedents.

Maybe the most famous is Las Meninas by Diego Velázquez. The work shows the painter (on the left holding a brush, duh) but also situates the viewer (that’d be you) as the object of his gaze. In other words, just looking at the painting you’re role-playing royalty.

Even more interesting is the mirror in the back of the room which reflects the royal couple (the true subjects of the painting-within-a-painting) — or which may simply reflect the canvas itself. In either case the viewer, while unseen, is a participant in the space. 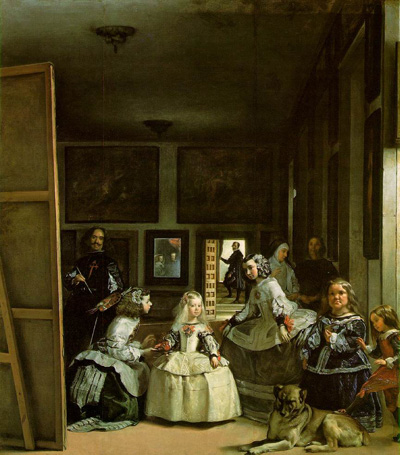 So there it is folks. Diego Velázquez pretty much nailed the lure of virtual worlds in a painting 352 years ago.

Scrolling forward a few centuries we have Mark Tansey, an artist smitten with the contrast between the static moment and the dynamic (lengthy) process of painting itself. Tansey’s Action Painting I and II place the artist in a position that only a photographer could capture, depicting a moment of catastrophic energy as if it were just another still life of fruit. 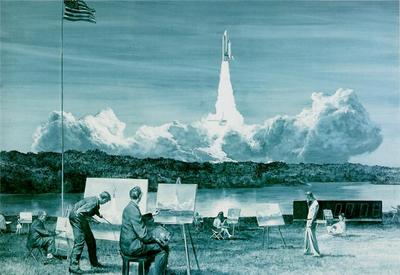 In the Virtual Forbidden City the painting scene is, essentially, a still life of the imperial family, but the fact that your viewing position is unlimited — you can walk around it, into it, or stick your nose right down onto the painting — speaks to both Velázquez’s and Tansey’s focus on the observer rather than the observed. This, to me, is the promise of virtual worlds. And something I hope we at least approach, if not achieve, with the VFC.

Of course the piece-de-resistance (artspeak, yes!) in this vein has got to be Robbie Dingo’s unbelievable recreation of Van Gogh’s Starry Night. I remember when we were building the prototype of the VFC in Second Life. SL, like many virtual worlds, is built from within, by avatars, moving primitive shapes like sorcerers. It was a striking scene being inside the world watching as walls were moved around, tweaked, textured and placed. Truly living inside the process of a painting.

If you’ve not seen Dingo’s video, do yourself this favor.

Phew, I made it. That was oblique enough, yes?

* And it must wait even a bit longer now. Eagle-eyed viewers of the site may have noticed I slyly changed the date of the project launch in the sidebar from “spring” until “fall” of this year, rounding out my involvement at a cool 4.5 years. Egads that’s a long time to work on a project.

* * Scenes in the VFC are basically looping historical tableaux that a visitor can approach on the grounds of the palace. Distinct from an activity which permits interaction.