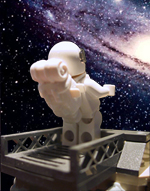 Seems like there are more first-time visitors to my humble blog than there used to be. This might be a function of my linking Twitter updates to Facebook status, which if you do the math means that a lot of non-geek acquaintances are now alighting on Ascent Stage without a clue in the world what the hell is going on. Welcome, dearest friends!

Thought I’d take a brief moment to explain the name of the blog, something I’ve never rightly done.

Simply, an ascent stage is the part of the rocket that goes up as opposed to being the one that breaks for going down. Sadly, in the post-Apollo era this has mostly been the only stage a rocket has. We ain’t landing anywhere with a rocket as long as we have a Shuttle.

Ascent stage refers usually to the upper half of the lunar modules that we put on the moon. The descent stage landed the astronauts (counteracting the moon’s weak gravity); the ascent stage put them back up to link with the Service Module whose rocket would take them home. Simple enough.

But why the name? What I’ve always liked about the concept of an ascent stage (in addition to the space dorkiness) is that it implies progress, upward motion, forward movement. But also a discrete point in time, or phase. There’s also something very slightly sad about it too, because to ascend means you descended at some point and you’re leaving something behind. (In the Apollo case this was the descent stage itself.)

There’s a classic image from the last Apollo mission where they left a camera specifically poised to capture the ascent back up to the orbiting command module — something which had not been done on previous missions. Not sure what it is but there’s something eerie and solemn about the footage that was captured. Two guys in a rickety polygon blasting off from a much more stable looking bottom half, which is now left to decay on the moon forever.

So, that’s kinda the rationale or feeling behind the name itself: progress, ascendancy, upward motion … tinged with mystery, loss, even desolation. My blog.

By the way, I’m considering a redesign. Input welcome. Via CAPCOM, naturally.