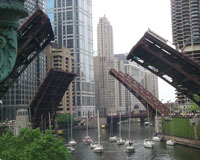 So here’s a new challenge for runners who live in urban areas bisected by waterways. Outrunning drawbridges. In Chicago you know that fall is here (meaning winter will be here tomorrow) when the drawbridges on the Chicago River are raised to let the sailboats back in from Lake Michigan for dry docking. So, the other day I went for a run at lunch. I had forgotten about the drawbridges — I think they raise them twice a week during the fall — and I found myself unable to cross the river to get to the path that takes me to the lake. OK, no big deal. If you know Chicago you know that you do not have to go very far to the next bridge. Except that my pace was just behind that of the boats and I could tell I was going to be repeatedly thwarted if I did not pick it up. Worst of all, the north side of the river east of Wabash (where Trump’s new paean to himself is going up) has these high stone railings which only permit the very tops of the sail masts to poke out as they slide by on the river. Looks exactly like shark fins. Just when I thought I’d make it to the next bridge one of the fins would slide into view and I knew I’d lost the next bridge. Eventually I did make it past the last bridge (Lake Shore Drive) and got onto the lake. But I rather enjoyed seeing if I could outrun Gilligan and company as they took their last rides of the season back into the city.

One response to “Man vs. sailboat”