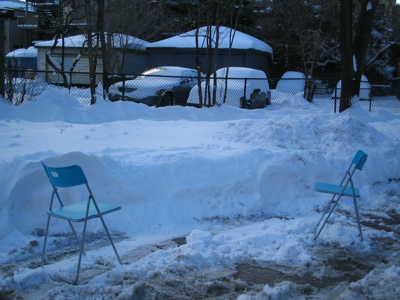 A few weeks ago we got quite a load of snow, but I was shocked to see not a single piece of household detritus placed in the street to claim a parking spot that had been carefully shovelled out. You see, the thinking here normally holds that if you go to the effort to excavate your car you shouldn’t have to cede the spot to some lazy schmuck when you drive off. This “tradition” of essentially claiming a property right for what is not yours is openly condoned by City Hall and often derided by suburbanites who love to highlight the irony of such un-neighborly conduct by the very citydwellers who bemoan the lack of sidewalk-centric community bonds in the suburbs.

Well, my worry was for nothing. This weekend we got an even bigger winter dumping (though not as big as what’s pounding the east coast) and, true to form, the crap is piling up in the street. Derelict couchs, two-by-fours, plastic lawn furniture — whatever can be tossed into the spot to prevent a would-be spot-stalker. There’d been some talk that gentrification was slowly killing this tradition, presumably because yuppies have garages and they like their streets not to look like the aftermath of a flea market. I’m happy to report that this does not seem to be the case. However, I will suspend final judgement on this trend until I see an altercation over a shovelled spot. (Certain brave drivers will actually move the impromptu barricades off the street to get a spot.) Only if the dispute ends in one neighbor deliberately icing another’s car with a hose will I consider the tradition to be thriving.

One response to “Mine!”