My great-grandparents came to America in 1903 from a small town called Barile in the region of Basilicata, Italy — basically the “instep” of the boot. I’ve visited Basilicata twice — more on that in an upcoming series of posts — and, though it has made much progress in the last ten years, I often find myself calling it the West Virginia of Italy. Rustic and mostly arid, many of the towns in the region are built on top of or straight out from sassi, the caves carved into soft rock that have formed the homes of inhabitants since well before Roman settlement of the peninsula.

Mel Gibson’s The Passion of the Christ was shot mainly in Matera, Basilicata, the town with the most striking sassi in the region. Shortly after seeing The Passion I learned that Gibson was merely following the Italian filmmaker Pier Paolo Pasolini in shooting a life of Christ in the region. In 1964, Pasolini released Il Vangelo secondo Matteo, a cinema vérité treatment of the gospel of Matthew using non-actors from Basilicata. I’ve read that Italian audiences actually demanded subtitles because the Albanian dialect of the “actors” was too difficult to understand. There’s absolutely no dramatic flourish in the film (a path Gibson diverged from in minute one of his film). This is Christ-as-peasant-among-peasants, seen from ground level. Call it Reality Hagiography. 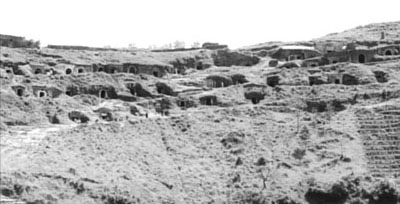 The sassi of Barile form the backdrop of the “slaughter of the innocents” scene. It is hard not to laugh at the centurions as they scamper up and down the hillside slashing at mothers and babies (some of whom fly out of embraces a little too easily). The film is likely to irritate modern viewing sensibilities for one reason or another, especially since the English dubbing is just awful. But I applaud the effort in the context of when and where it was made. If you’re going to shoot Christ as a man of humble origin you’ll not err in choosing Barile as a home town.

Compare the shot from the film above to a panorama of the same caves, now private wine cellars, taken last year.