Confession: I am an album art junkie. I can’t stand digital music that doesn’t have correct, decent-resolution album art embedded in it. (In graduate school one of my projects in multimedia design was a website for a future Museum of Album Cover Art. It was, as a recall, not exactly a masterpiece itself.) So, it would make sense that possibly the only real gripe I have with my beloved, unsupported, rapidly-becoming-an-antique Audiotron is that it has no capability for showing album art via its web interface nor does it have a video out to display album art on the TV set. Imagine my horror to learn that the iPod photo — which of course displays album art on its screen, hurray! — does not show said art via its TV out. I don’t want slideshows of my kids, damnit! I want to see the files that I so painstakingly embedded in my MP3 files! This seems so unlike Apple to me. Why black out the TV output when you are listening to music? (By the way, I am still waiting for the album art dongle thing.) 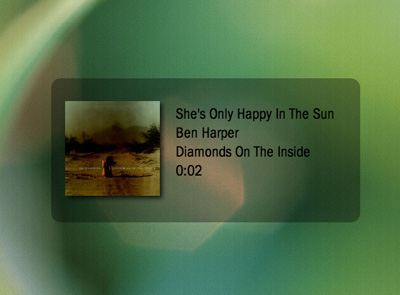 The news isn’t all bad, though. Recently TiVo released an SDK to developers for their Home Media Engine. (Yes, yes, too little too late, but let’s have fun while they implode, OK?) There are already a bunch of alpha-quality apps out there for it, and one of them will synch up with iTunes (on the Mac) and display the album art of whatever you are listening to on the TV screen. Clean, simple, nicely done.