By any other name

The NameVoyager over at Baby Name Wizard is just wonderful. The interactive graph plots the top 1000 baby names over the past century. The beauty of the interaction mode is that, as with search engines that start looking before you finish typing, NameVoyager dynamically re-draws itself with each letter of the name you input, allowing you to see variants and related name-forms morph through time. 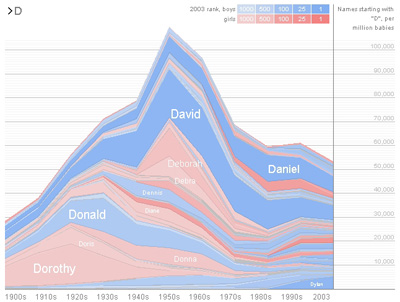 This chart shows the popularity of names starting with ‘D’. Is there some cultural trend that can explain why the initial ‘D’ sound was so valued at mid-century but has been on the skids ever since? Whatever it is might explain why why mother and all four of her siblings (born in the later 1940’s and early 1950’s) all have names beginning with ‘D’. Or perhaps my grandparents — also with ‘D’ names — were just nutty about alliteration? And as long as we are searching for answers, what the f*** is going on with “F” names?

I was thinking about names today after I asked my son what the name of the “dog” he made out of Legos was. It occurred to me that I always ask him the name of things he creates or takes new possession of (like, say, a stuffed animal). He stops, recalls with some surprise that he has not named the thing, umms, and then usually produces a slight variant of the nearest tangible noun he spots. “Glass-y,” “Ball-oo,” “Rug-a.” Makes for some spontaneous, if un-memorable, names.

One response to “By any other name”