So, a few days into my China trip my laptop died — motherboard fried. You see, my machine prefers to crap out when I am half a globe away from my local tech support, having most recently decided to spin its hard disk platters into the drive armature when I was in Egypt in October. Yeah, I needed that. What’s worse this time is that I had only recently achieved the goal of getting rid of individual power cords for my camera, iPod, and phone, instead charging them all via USB through the laptop. You see where I am going with this, no doubt. With a dead machine, nothing would charge. Single point of failure. Nice design, John. My technology world came crashing down in a single heap of powerless gadgets. And it was a weekend with little hope of tech support in China. How did I manage? My trusty moleskine of course! Eventually on the last day before coming home, some colleagues of mine in Taipei were able to repair my machine with one of only four motherboards for my laptop model on the island. Nicely solved!

A couple of assorted things before this China travelogue comes to an end.

Finally, some more polite signage from the Forbidden City. Really, no problem at all. 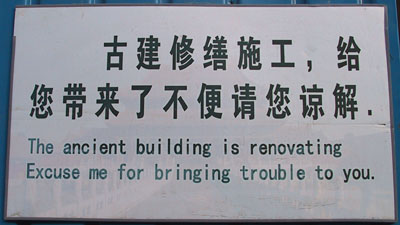 Fine, but everyone knows there’s no such thing as a five-star crapper. Simply ridiculous. The scale just doesn’t go that high.