A long walk out of Africa

I’m just back from Canada (great trip, more soon) and my genographic data analysis is complete. The first finding is that I am, in fact, of the human species — a data point which generates almost limitless disbelief among acquaintances. Second, it is interesting that, well, it connects my genography to my actual genealogical line (the family I actually know about as opposed to my descendants 60,000 years back) and plops it right where I thought it’d be: southern Italy. I didn’t expect that kind of linkage. 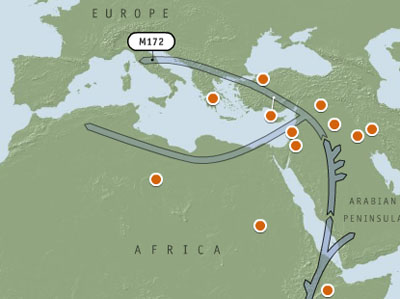 My Y chromosome exhibits a genetic mutation known as M172 which makes me a member of haplogroup J2. M172 itself is related to a mutation called M168 which astonishingly can be traced to a single individual called “Eurasian Adam,” the common ancestor of every non-African person living today. His descendants are the only line to survive after leaving Africa. But back to M172. This line heads out of east Africa to the Arabian peninsula, takes an incunabular pitstop in Mesopotamia, then treks west through Turkey, Albania, and into Italy. But what’s that fork across north Africa? And all the other forklets? Well that’s what this project hopes to figure out as it analyzes DNA from indigenous people around the world.

Oh boy. I got some reading to do.