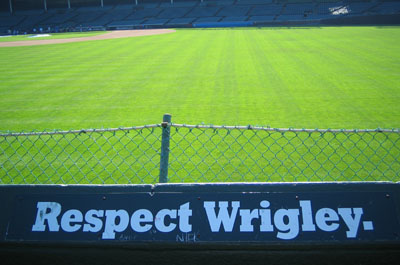 For Father’s Day I received a behind-the-scenes tour of Wrigley Field with my wife and oldest son. What a gift. If an unsanctified place can be holy, Wrigley is it.

One thing that struck me is how completely devoid of advertising the park is. You sense this when watching a game, but that’s the thing about a lack of in-your-face advertisement: when it isn’t there you focus on what matters and don’t consciously register its absence. In fact, you have to look really hard to find any advertisement. Up until a few years ago there was none, zero, zip. But now it exists on seat-back cupholders (which, if you are looking at that during a Cubs game, you got bigger problems), occasional scrolls on the three small LED boards, and — during big games — on the green screen in back of home plate. The green screen is particularly Wrigleyesque in that visitors to the park don’t ever see the superimposed ads. Only the shleps at home.

The other thing that really strikes you is what a shit-hole Wrigley is off the field. Built in 1914, the park is just a tad younger than Fenway — and it shows. The press rooms are like veal pens, the visiting team locker room is laughably awful — it actually smells like mildew, and I bet the Cubs clubhouse is less spacious than many minor league locker rooms. But hey. It is a ballpark. For ballplaying. No reason to dally in the locker rooms. Just get out there and play on the best field in baseball.

Fans on the rooftops. The L clanking by. Sailboats on the lake visible from the cheap seats. Manual scoreboard. Old Style beer. Amen.

One response to “Friendly confinement”