The destruction of Clermont Harbor

We knew from the aerial shots that Clermont Harbor, home to my grandparents-in-law, was destroyed by the storm surge of Katrina. But certain areas of the image allowed us to hold hope that something survived.

We know this to be untrue now. There is nothing left in Clermont Harbor. Rick at The Chronicles of Jake did my family the great service of taking a detour in his trip to Waveland to photograph my in-laws’ street. The magnitude of the wreckage defies belief, even after the endless parade of gulf coast images in the media has somewhat inoculated me. 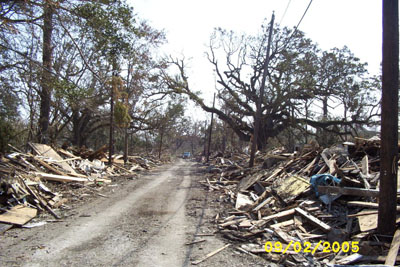 We’re fairly certain that this is Forrest Ave. in Clermont Harbor.

My husband and I went on Saturday, 9/3 to salvage what we could and we came away with a garden sign and football. I’m sorry to say that there is not a structure left standing in the community of Clermont Harbor south of the railroad tracks. It is nearly impossible to find anything amidst the rubble.

Special thanks to Rick and Jennifer. (Viva blogosphere!) And thanks to everyone who wrote to offer support. All our relatives are safe. Some of the family from Kenner have already returned, with those from Gretna and Algiers possibly behind them soon. Those who suffered more damage have been relocated to Baton Rouge and Texas.

One response to “The destruction of Clermont Harbor”