One treat from my recent visit to UCLA was meeting the Urban Simulation Team. This small group develops detailed, precise 3D models of cities past and present for educational use, as a tool for urban planners, and even to facilitate emergency response. Their main focus is currently a complete modelling of the Los Angeles basin, but what really piqued my interest was Prof. Lisa Snyder’s “side project” to recreate the fairgrounds of the 1893 World Columbian Exposition in Chicago. She’s creating the White City — and doing a great job with limited resources. 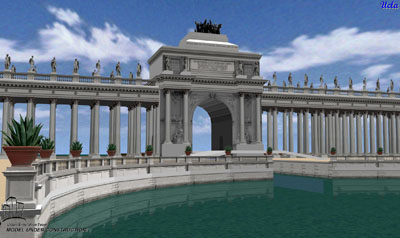 While Leonardo di Caprio and Tom Cruise vie for the movie rights to Erik Larson’s wonderful telling of the story of Burnham, Olmstead, and proto-serial killer H.H. Holmes, Snyder patiently slaves away at the reconstruction with surprisingly scant documentation. For instance, we think of the buildings as being white, of course, which is supported by the monochrome photography of the period. But we know from architectural plans that the buildings were not uniformly white. The devil may have been in the White City, but he’s also in the details of recoloring it. Snyder has her work cut out for her.

Even in its half-finished state, the model is sublime. Viewing the fairgrounds from the gargantuan Ferris Wheel or from the elevated train or from Olmstead’s electric canal boats or from the futuristic moving sidewalk that jutted into Lake Michigan are all experiences not available with the strictly controlled photographic record of the city. The sense of scale is immediate. There’s a bleak majesty to it when you consider that it was all gone by the turn of the century. (Except for the refaced Fine Arts Building, now the Museum of Science and Industry — where, incidentally, I asked my then-girlfriend to marry me.)

I ride my bike in the area of the fairgrounds a few times each summer. There’s some historic signage and some replicated statuary, but the landscape itself is really the only place you’ll find evidence of the Expo. A long split boulevard bordering the University of Chicago marks the fair’s Midway (Snyder tells me that the concrete pads the Ferris Wheel rested on are still there, beneath the park’s sod) and neglected lagoons are evidence of Olmstead’s triumphant carving of the waterways throughout the fairgrounds. As the UST recreation of the White City proceeds one can dream of integrating it into the landscape itself, perhaps as a location-based service offered through the Chicago Park District or, better, as an outside-the-walls extension of the Museum of Science and Industry. Mapping the virtual structures onto the shadows of the fair embedded in the landscape would be a moving experience indeed.