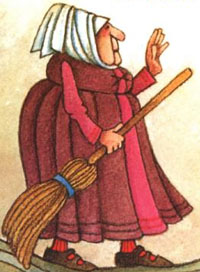 Today the main Catholic church in Chicago’s Little Italy celebrated La Befana, the good witch of the epiphany. The story goes that Befana was a little old lady who took the three kings in for a meal and rest on their way to Christ’s birth in Bethlehem. They asked her to join them but being too busy with housework she declined, only later realizing that she had missed an opportunity to witness the birth of the savior. So she packed up some gifts and set out to find them and the baby, but she never did and continues wandering the earth (a bit creepy, no?) depositing gifts in children’s stockings to make up for missing Christ’s birth. Typically the gifts are treats of some kind. Even the coal is sweet.

For our family, La Befana marks the end of exactly one month of gift-giving mayhem. It starts on Dec. 6. with the Dutch tradition of putting out shoes for St. Nicholas moves through the pagan-Christian-consumerist Christmas festivities and ends with the Italian tradition of La Befana. Phew. Multiculturalism is tiring.