The discards of Los Alamos 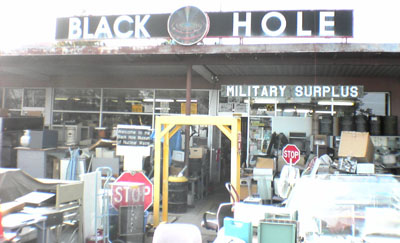 I’ve spent much of the past week hearing about the latest in museum technology. There were even organized outings to the museums in and around Albuquerque for us to get a gander firsthand. Strangely none of the organized tours included The Black Hole Museum of Nuclear Waste in Los Alamos.

Run for over 50 years by a guy named Edward Grothus, the museum is more like the backlot of a Mad Max film. In fact, in an irony I am certain is not lost on Grothus the place looks exactly like some archaeology dig where future humans are uncovering the remains of a once-great society’s technology after a nuclear catastrophe. He has built, in other words, that which he hopes to prevent. You might think a “museum” to the scraps of Los Alamos is some kind of reverential exercise, but there’s actually a peace theme that runs throughout, as if Grothus were hoarding all this utterly useless stuff (vials of Liquid Paper!) because he doesn’t want its bad karma let loose in the wild. Of course, it does get out; he sells it. But what sells can only be a tiny fraction, because most of the stuff you could simply stroll through Office Depot for. And it is reverential, in a way, as Grothus conducts a “Critical Mass” every Sunday in a huge A-frame “church” next door.

The technological gizmos are the most interesting for sure. All kinds of specialized and worrisome componentry sits amidst computers of bygone eras. It is like a library once-removed where you walk through wondering what documents, equations, and national security communiques issued from the teletypes and keyboards.

A fascinating museum, if ever there was one. Highly recommended. Bugs, I’m glad I took that left turn at Albuquerque.