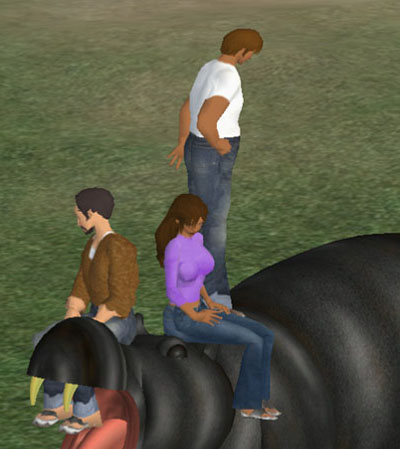 This past Sunday Chicagoans emerged from their winter bunkers to embrace the first Spring-like weather we’ve had. They did it enthusiastically. Perhaps too much so: it really wasn’t that warm. But goodness what a difference it made. The city was seething with happiness. Everyone was outside, walking, running, playing, being seen, having brunch with friends, perched on stoops, meeting neighbors. If the city is a living organism and sidewalks are the circulatory system then this specimen was near the peak of its cardiovasicular capacity.

I have said it before and I will say it again: there is no city on Earth that does summer as well as Chicago does. The most deliberately savored 90 days anywhere. This past weekend was but a warmup.

Another world came alive this weekend, to me at least. I’ve mentioned my interest in the virtual world known as Second Life. Now, you’re probably thinking, this guy has two kids with a third on the way — of course he needs a second life. Har. Actually I find it fascinating, like I’ve just discovered the web or something (which I remember vividly, thank you Mosaic!) Some colleagues of mine in the UK actually use Second Life for team meetings, an idea that makes a ton of sense since it merges the textual immediacy of chat with the gestural and multimedia capacity of videoconferencing.

My sister and father and I have a bookclub. We rotate selection of the book and it gives us a great excuse to to take a break from our own families and have a lunch together. We usually select a place to eat that has some relationship to the book. (For instance, for one of my Dad’s selections about the Manhattan Project we met near the site of the first successful fission of an atom at the University of Chicago.) The book we read this time was Cast of Shadows, a story about a doctor working at a human cloning clinic (like a reproduction clinic) whose daughter is raped and killed and whose murderer is never caught. The doctor, using semen from the crime scene, clones his daughter’s killer and arranges for him to be raised by a couple out of fertility options. He follows the boy as he grows in hopes of getting a clue to the man — the boy’s genetic clone, of course — who killed his daughter. A significant portion of the book occurs in a virtual environment called Shadow World, furthering the notion of cloning. Well, Second Life is a lot like Shadow World. So we had our bookclub in there, virtually, as avatars in Second Life.

What made this experiment more interesting is that my dad, sis, and I were all physically together in my basement on different computers interacting more or less interchangeably inside and outside of the world. Once we got past the normal new-user issues with my father (forgotten password, all thumbs on the keyboard, etc.) we were off and running — or flying, the mode of transport most useful in SL. It was probably the most enjoyable bookclub we’ve had. I was the tour guide, showing my family around my favorite parts of Second Life like a museum docent. Most of the club meeting was spent looking for somewhere out of earshot of others where we could quietly discuss the book. This was probably a mistake since all we’d really have to do is IM each other in-world, but I found it interesting that we desperately wanted to find some real-world analog (like a coffee shop) to have our conversation.

My father, true to real life, kept getting lost. Luckily I could always offer to teleport him to where my sister and I were. If only we had this ability in real life. Body modification also occupied much of my father’s and sister’s time. My sister — a petite, conservative lawyer in real life — was obsessed with being, well, slutty. She gave herself the biggest boobs allowable, pants that literally were painted on, and lips that were comically oversized. I could hardly look at her for fear of the disturbing possibility of being turned on by a virtual depiction of my own sister. My father, on the other hand, looked like a lifelong beer drinker who focused exclusively on upper-chest muscle toning. We were a motley crew. My sister was deathly afraid of interaction with the other residents of Second Life. (Well, she should have been, dressed like that!) In her mind she had a specific reason for being in SL whereas all these other people were clearly miscreant do-nothings simply prowling about. (This is definitely not the case. In fact it is probably the opposite right now, akin to the early days of the Internet when it was populated only with a certain intelligent stratum of tech-savvy adventurers. Give it time, though. I predict we’ll see the same diversified spamification of Second Life as we’ve seen in e-mail and on the web.)

The session ended, rather poetically, with us all astride a statue of a hippopotamus in a park we stumbled into somewhere. That’s the beauty of SL. Like a second box of chocolates, you still never know what you’re going to get.

One response to “Two worlds come to life”