One of my resolutions in January was to find my roommate from study abroad in Rome in 1993. I listed his name hoping that it’d get indexed and that at some time in the future he’d Google himself and find that I was looking for him. This is exactly what happened. Some people feel self-conscious about Googling themselves, which is crazy. It is the one sure bet you can make: people will Google their own names (and download naughty things, I suppose). This behavior is so natural that if you have your name on a page with another’s name you can be fairly certain the other will see it at some point in the future. Sort of like posting a note for a person to find out in the wilderness. But found it will be, eventually.

Can you tell what photos of a fan-powered Santa, a stumped computer-user, a truckload of anchovies, and middle-aged Swedes dancing the night away have in common? 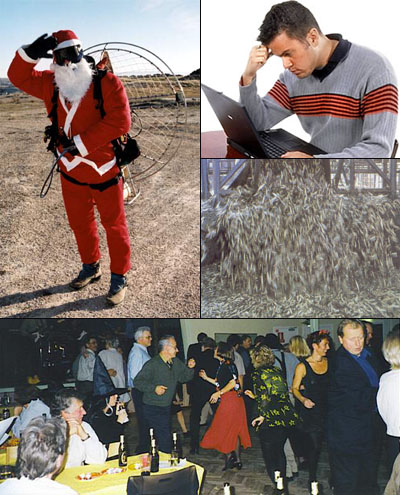 They are all returned as image results when Googling my last name. Now, I’ve known for a while that my last name is Icelandic for ‘computer,’ but a majority of the images are of construction equipment or bizarre machinery. The Santa hoverpack? No idea.

Think of it as visual tagging or reverse-steganography. Instead of embedding a secret word in images, you deduce the word from the images themselves. What would be great is a Google image upload feature (akin to typing a keyword) that matched submissions against the database and provided you with shared keyword terms.