Flashmobbing in the virtual Far East

If all the feel-good talk of virtual community and social networking has you wanting to gag, you’ll be pleased to know that mob justice is alive and well in the metaverse too.

The supremely popular Chinese online role-playing game called “The Fantasy of the Journey West” was recently the scene of a massive virtual protest over the depiction of what looked like a Japanese imperial flag inside a traditional Chinese government office. But that makes it sound halfway rational. You have to see the screen grabs of thousands of huddled avatars spewing nationalist rage to fully appreciate the lunacy. 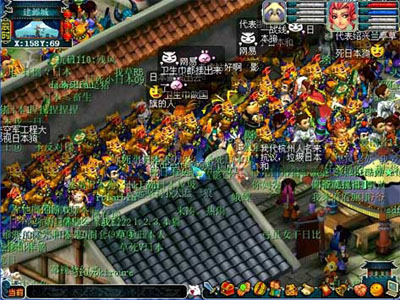 EastSouthWestNorth has the blow-by-blow, while Salon attempts to sort out the mess.

Sheesh, some people sure get upset about flags, you know? Must be an election year in China. No, wait …