“Nice, but a little weird”

I’ve been in Los Alamos, New Mexico helping Steve Delahoyde from Coudal Partners on their latest short film project 72°. The original idea was to travel here to scope the Black Hole museum/junkyard/post-nuclear monument for vintage computing equipment. Scope we did, and find we did. The pieces we need are huge, dirty, and packed into a dark aisle crammed with decrepit gizmos. If we end up using them for the film we might have to do so on (or near) location. Would cost a fortune to transport. 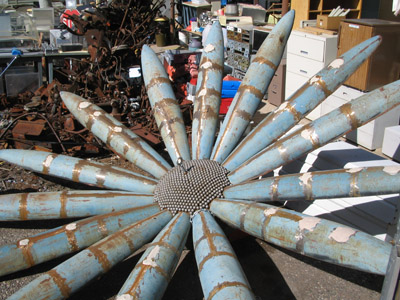 We also decided to do a little side documentary on the town itself. The place is amazingly normal on the surface … a little too normal. Think Pleasantville or The Truman Show. It is a company town through and through, but one in which the ties that bind are not as simple as, say, in a Ford factory town. Secrecy and security are pervasive. Perched on a hill with virtually no crime, Los Alamos also boasts a higher IQ per capita than just about anything but the smallest university town.

It’s a town that has seen hardly any population growth since the 1950s. It’s a place where nearly everyone who goes to school here leaves. It’s a place where few people are allowed to talk about what they do for a living. It’s a place that has the largest average income of any town in the country, yet the retail sector is a shambles and few businesses survive. 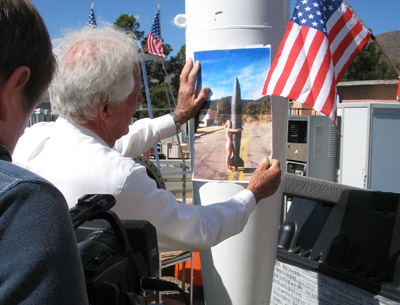 Naturally we had to find out more. We spent two days interviewing anyone we could get our hands on. Merchants, teachers, lab employees and retirees, museum docents and even the town peace “kook”. (He’s no kook.) You never quite know what you’re going to get when you walk up to someone and ask to mic and video them, but almost to a person the interviews surprised and enlightened us.

We’re looking forward to sharing these amazing stories with you, as Steve works to edit the many hours into a coherent piece. For now, here are two video snippets: postcard one and postcard two. As always you can follow the main film’s progress at the 72° blog.

One response to ““Nice, but a little weird””