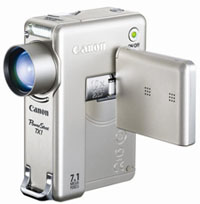 Convergence is not a flavor of tech hype I’m particularly susceptible to. Best device for the task, and all that. But both my trusty mini-DV cam and still camera went south at about the same time and so I naturally wondered if I could get away with a single camera. About a year before I was able to play around with a friend’s remarkable straight-to-memory videocam (which because of its small size enabled things like this). It was far too expensive to justify, however.

Enter the the Canon TX-1, by most accounts the first reasonably-priced ($500) high-definition tapeless camcorder that takes equally good stills. I’ve had it for a little over a week now and I’m totally impressed. There’s a comprehensive review over at DCRP, but here are a few quick thoughts.

Video image quality is stunning. It captures at 720p in 16:9. The downside is filesize, since the format is not MPEG but rather MJPEG (wrapped in an AVI container). MJPEG is literally a stream of single JPEG-compressed images. 15 minutes of video captured this way is a whopping 4GB. Even with the new 8GB SDHC cards on the market the TX-1 will stop recording at 4GB. (You can start a new clip immediately though.) The upside of MJPEG is that, since there is no inter-frame compression, you can actually pluck a still from the middle of the video and get a 7.1 megapixel shot. In fact you can take a still photo while shooting video. Nice touch — except that the camera records a frozen shot and shutter noise into the video itself. What’s up with that? Of course, you don’t have to capture in high-def. Video shot at VGA resolution looks quite good. You can capture a few hours at this rate, depending on tweaking.

The form factor is vertical, which takes some getting used to. Like you’re shooting a gun. People have complained about being unable to shoot with one hand. It can be done, it just takes time to learn. The really hard part is not the form but the size. The thing is just tiny, hardly bigger than a pack of cards. I constantly feel like I am going to drop the thing.

iPhoto works fine in snagging photos and videos from the camera … to a point. Any video larger than about 3/4 GB chokes. You must use the included Canon ImageBrowser software to remove files this size and larger, which is a bummer because the software itself is crappy. Hopefully iLife ’07 will address this issue.

One response to “Canon fodder”