Continuing down the checklist of things I’d like to see/do at Wrigley Field (lounge in the outfield, check; witness drubbing of Sox in crosstown match, check), Tuesday night was my first game viewed from a building rooftop outside the park. Those of you who don’t follow baseball may not know that Wrigley, being a 93-year-old urban ballpark, is tightly surrounded by a residential neighborhood. Three-flats line left and right field and, except two that display advertising, each of these buildings have for years hosted private groups on their rooftops. It is a unique vantage, this outsiders’ view inside. 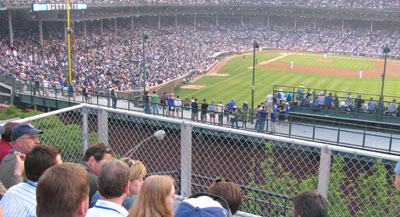 I remember watching a game with my grandfather in the late 70’s when Bill Buckner hit a home run out of the park and shattered a window in one of the buildings. I thought, wow, someone is going to come home from work and find a great surprise. Of course, these days very few come “home” to these buildings. The homes have been almost completely taken over by the “clubs” which perch atop them. Many are owned by local bars, nearly all are managed by the same company. (After a nasty battle involving the erection of screens to partially obscure the view from the roofs most of the clubs agreed to give the Cubs 17% of their revenue annually.) There’s one private club too. A few years ago my wife tried to get tickets for me up on a roof for my birthday. It was next to impossible because the roofs are really for groups, corporate outings, and the like. Sorta like a skybox, except across the street.

I was invited by a friend who was in with some Chicago society of CPAs. Yes, I was on a Wrigleyville rooftop with a bunch of accountants: good times! I tried to keep out of conversations — which was easy given the free beer and food and the fact that I was there to watch a baseball game. And that’s the thing about the rooftops. Many people hardly notice what’s going on in the ballpark. (It is, in that way, very much like a skybox.) Most are corporate types, many are not Cubs fans or even baseball fans. Of course, you get this in the park too, but on a rooftop quarters are tight — tighter than I imagined — and you’re kinda stuck with these folks. 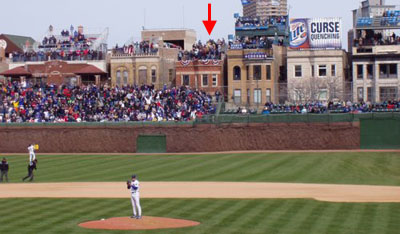 The rooftops all have high-def TV’s sprinkled around, but the broadcast delay makes it almost useless for anything but replays. I was grabbing a beer in an area where I could not see the park and I heard a cheer go up. I looked up at the screen and the camera was on the pitcher, scratching himself. To make matters worse the audio is off and they are playing the radio coverage of the game, which has no delay.

The view is great though. Not that much worse than some of the cheap seats in the upper deck. The only thing you can’t see is activity on the track near the ivy. But you use the cheers or sighs from the bleacher bums to determine what happened there. And of course it is just fun conceptually: I’m watching a live baseball game and I’m not in the park.

In the end I suppose the idea is a bit better than the experience. Of course, I didn’t pay for the ticket (which was at least $90) — and perhaps it would have been more fun with a roof full of friends — so I can’t complain really. It just wasn’t the raucous time that the park delivers. I think I’d rather be inside.