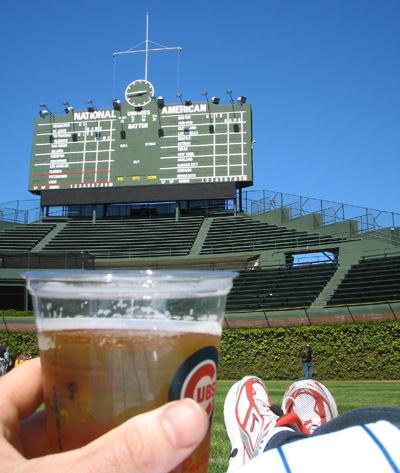 When it comes to Wrigley Field lots of people talk about how great it is to see a ballgame smack in the middle of a vibrant neighborhood. Not as many talk about what this means for the neighbors. It is of course a boon to the merchants and businesses in very close proximity to the field, but the neighborhood also serves as the stadium’s parking lot (the only one, really) and as a mile-square urinal for the ocean of over-served fans who spill out at game’s end.

The Cubs have in recent years made a special effort to win the good will of the people who live in the community, specifically the area known as Lakeview. This includes spiffing up local parks, appearances of hall of fame players in the area, and free bike lock-up for games. But the coolest perk has to be Wrigleyville Neighbors Day. Each year the Cubs hold a lottery for residents in Lakeview to come to the park for 90 minutes of free food and drinks (alcohol too) and to play catch, picnic, or just lounge on the field. We’ve lost out the last two years but got it this year. One person per address plus guest. I took my son.

We were close to the front of the line of about 100 people so when we entered the field from the service door in the outfield it was like the park was ours alone. We ran out onto the grass with our mitts, one five-year-old boy and his five-year-old father. At first we just ran around because we could. We played catch. We ran the bases (four times) and just lounged in the outfield. It was extraordinary. A wonderful, memorable way to spend an afternoon. Thanks, Cubs. Well done.