What did I do right after getting an iPhone? Took a quick day-trip to the only cell reception black hole I know about in these parts: my parents place in Galena, IL. No reception whatsoever. Let me say that a VOIP app on the iPhone would truly be killer (and would stick it to AT&T).

But I digress before I’ve even started.

My parents’ place is in rural Illinois, near the Mississippi. Their land is covered with wild raspberries. Technically they are called bramble raspberries, smaller than store-bought (of course) and black when ripe, though they are not blackberries. These little buggers are super-tasty. 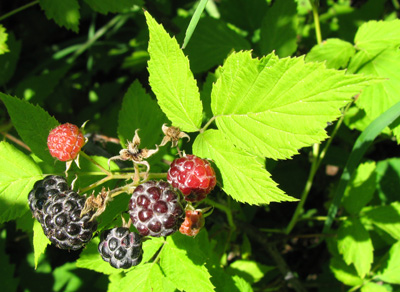 The window to get them is very narrow, though, since birds and chipmunks snatch them up. My uncle told me a story about how he was sitting on his porch one day late in the ripeness cycle of the berries and the chipmunks were gorging themselves. Apparently if the berries become too ripe their natural sugars will begin to ferment from airborne yeasts and they become little alcohol bombs. He said the chipmunks were actually staggering around. Not sure if I believe this, but it did give me an idea. Raspberry wine! Following on the success of the apple cider we made at Christmas, we’re embarking on the next fruit-based alcohol concoction.

They’re called bramble raspberries for a reason. They grow in dense, thorn-strewn foliage. After a short while it was hard to know where the juice stains ended and the bloody micro-cuts began. In a few hours we had a couple pounds. Here are some tips for you budding (yes!) raspberry hunters.

We won’t get to actually crushing/fermenting until after Italy. Luckily you have to freeze the berries and then let them thaw before crushing to prevent the seeds from spoiling the juice. So we have some time.

One response to “Brambleberry”