“A cross between horseshoes and sodomy”

Summer in Chicago is technically over, but winter seems not to have gotten the memo and the The Greatest Ninety Days in any city seems to be rolling on.

As such, the sidewalks are alive with a simple game. It is called baggo, or bags, or bag toss, or as it is most unfortunately known around these parts: cornhole. (The bags are filled with corn kernels, you see.) Any game that enables you to play it while holding a beer in one hand and making endless sodomy jokes is bound to be good fun, no? 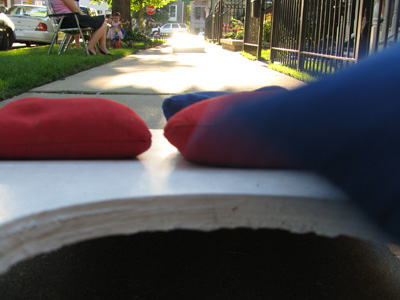 All it takes are two boards with holes, placed about 25 feet apart (the standard width of lots in the city — handy), and a couple of bags. Oh, and beer. See I believe this game was made specifically so that you could engage in a competition without putting your beer down. Which makes it perfect for tailgating and frat boys. But damn is it fun. The rules are simple: three points in the hole, one for on the board, you can knock others off, first one to 21. (There is a cancel-out variant of the rules where you have to do better than your opponent per turn to score at all, but that’s just, you know, complicated.)

But the real reason I like it is that it is an engine of social interaction for passersby. You’re blocking the sidewalk and the game makes a natural conversation point. I have met more neighbors in the past months playing baggo than I have in the past five years. Recently one evening when I was playing with my father-in-law (there’s a streetlamp right in front of our house) two drunkards spilled from the corner bar and slapped $5 on the far board. They managed to say something near “sink it in one throw.” I did. Not sure how I did, but I did.

Of course if you play on a weekend night you’re going to encounter idiots. One of the tactics in baggo involves deliberately trying to get your opponent’s bag off the board with no hope of scoring yourself. This involves an overhand throw, pitching-style. Of course, if you miss, the bag sails down the sidewalk.

This is precisely what happened a few weeks ago when, as our annual neighborhood party let out for the night, a few inebriated revelers strolled by. Can you piece together what happened next? The fellows thought we were trying to hit them. Took the bag and walked. Luckily I had a gigantic brit friend in town and he was right behind me as I negotiated the return of my precious corn-bag. Friend stared and grunted menacingly behind me, like a thug from a Guy Ritchie film. Bag returned, all OK. The magic of cornhole.

As with anything simple, it can be made less so with gadgets. Wife has not allowed me to purchase the LED tubing to light the hole at night, but damn it is tempting. And where is pimpmycornhole.com? That is money on the table, people!

You ask, all good fun, but is there a governing body of this nascent sport? But of course there is.

One response to ““A cross between horseshoes and sodomy””