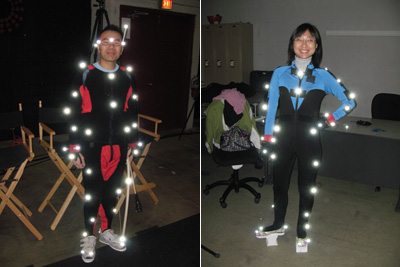 Had my first dose of a live motion-capture shoot last week for the Forbidden City project. I don’t talk much about the project around these parts, but we’re in the final stretch — targeting a June 2008 launch — and this was just too cool not to document.

We’re working with a game development studio in the Chicago suburbs to help us tackle the substantial modeling challenges of the project. Beyond the sheer volume of buildings, spaces, and gardens to create are the challenges of animating traditional or complex human movements found in the palace complex. But using motion capture and two very capable actors, we were able to grab the data in one go rather than hand-model it.

Pictured above left is an actor who performed archery movements and above right an actress who walked precariously on custom-made Ming-era platform shoes up and down stairs and ramps. The glowing bulbs on the suits aren’t actually lit; that’s just from my camera’s flash. But the reflectors are constantly sending back infrared signals to a forest of transmitter/receiver units circling the acting space.

The data needs massaging, of course, but there’s a smoothness to it that would take far longer to model manually. Plus, certain things — like walking regally on platform shoes — is something an animator would have to guess at.

Best of all, a production team from The History Channel was with us for this session and subsequent shoots back at the IBM lair. I guess I’ve not mentioned it here before, but there’s a documentary in the works about the Forbidden City and our project figures prominently. (Exactly as they did with the Eternal Egypt project back in 2005.)

One response to “Mo-cap”