Two of my resolutions for this year were to simplify things and to run more. These are, in fact, the same thing.

The past several years I’ve been doing one or more triathlons a summer. Good fun for sure and a great workout, but logistically complex. I mean, I’m all for gear and equipment — it is, I believe, one of the reasons I wanted children — but needing a place to swim and the multi-hour stretches of time required to bike had become a bit onerous, especially when traveling. So simplifying for me was running: the perfect, low-tech, do-anywhere workout.

But I’m still a sucker for exercise gadgets. (No, not that kind.) I used to run with a Garmin Forerunner GPS. It was bulky and didn’t monitor heart rate, so of course I wore a second watch that did do that. Wearing two watches (and an MP3 player) while running was a level of dorkdom I didn’t think I could achieve, but achieve I did. And playing with GPS allowed me to do nutty things like using the city as a giant Etch-a-Sketch. Unfortunately neither device played well with the Mac so all this wonderful data I was collecting couldn’t be manipulated easily.

Right around this time Nike and Apple introduced the Nike+iPod gadget, basically a wireless pedometer that logs distance and pace to the iPod nano as you run. I ditched the GPS watch (which incidentally don’t work so good in awful weather or in weird places like Lower Wacker). The integration with an online tool and ease of just plugging in your iPod after a workout was a perfect solution, all-Flash interface on the Nike site notwithstanding. (Only real gripe: it is made to work with Nike shoes, which I loathe. But that was easily solved with a knife.)

So, it seems that Nike/Apple are rolling out an upgrade to the service. There doesn’t seem to be a hardware change, but they’re branching out from just running. Apparently Nike is “in talks” with gyms and equipment manufacturers to allow the nano to plug directly into treadmills, ellipticals, stair climbers, and stationary bikes. So, basically, the piezo sensor in the shoe is bypassed and data from the workout is sent directly from the machine to the nano. That’s fine, except that in the past when I have run on a treadmill with the current kit I find that the pedometer does not agree with the treadmill distance. (After an 8 mile run the treadmill was off by nearly 3/4 of a mile.) Clearly there will be discrepancies for people who run both outside and inside.

The strangest thing about the announcement is that Nike has developed a new, common workout “unit” called a CardioMile. My guess is that this enables users to “compete” against each other regardless of their preferred machine. But it does seem odd. I mean, mileage is mileage. If you and I are in a competition the person who runs furtherest (or fastest) first wins. But if I use the elliptical for 45 minutes have I “beaten” a person who was on the treadmill for 30? Kinda bizarre.

How it will actually work is another matter entirely. Will it be a retrofit for existing exercise equipment or brand new machines? If the latter that’s a hell of a lot of stuff to replace because a few geeks want to plug in their iPods. Will the headphone connectors commonplace on workout equipment today now route audio from your iPod? Does the gym have to provide tech support?

Early this year I looked at a new gym right by my work. They had spanking new treadmills that did allow iPod hookups. Not for workout data, of course, but it seemed promising since there was a large screen embedded in the treadmill too. Excellent, I can watch video straight from my iPod! But … no. Not only were video functions inoperable, but all it really did was replace your iPod controls with a touchscreen interface for the same controls. Essentially useless. Or rather, no functionality beyond what you could get without hooking your iPod up. (One wonders if the treadmill is the new office desk.) 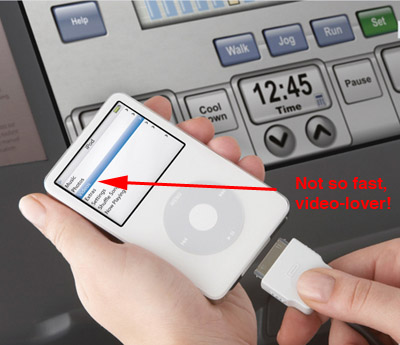 More promising was a USB port on the treadmill display. OK, now we’re talking! Save your workout data (generated from the treadmill) straight to the memory stick. Well, it didn’t work. I tried multiple USB keys, multiple treadmills over many days. Never did work. Inquiries to staff were met with blank stares and general dumbfoundity. It went something like this.

“Hi there. Really loving the new treadmills, thanks. I was wondering if you could help me figure out how to use the USB saving function.”

“You know, the new thing … where you can plug in this [waves USB key] and save your run data?”

“OK, do you have a manual maybe? Something I can look at?”

And this is why I think the whole Nike+iPod machine integration thing might be doomed. Gyms will need tech support. Now, I’m not saying there aren’t a lot of fitness-obsessed geeks or tech-savvy meatheads, but the Venn diagram of hardware debugger vs. personal trainer for your typical club probably has a very tiny circle at its center. I just don’t see this sort of thing taking off. Which may be why the press release is on Nike’s site, not Apple’s.

So, I go basic. Or as basic as I can still swaddled in the loving embrace of technology. Just running, just outside. We’ve quit our club. The city is now our gym. I’m signed up for a beautiful 10 mile race in April — my first in many years (and with my wife, who can run further than I can these days). And I’m considering a multi-leg 200 mile relay from Madison to Chicago. Not sure I can take the on-again, off-again but the prospect of running in the dead of night does hold a certain perverse charm.

By the way, I’m still looking for a unified, standardized format for workout data. Microformats anyone?

2 Responses to “Back to basics”