Glass beads are not an indigenous art form in West Africa. Today’s Ghanaian bead-makers continue a craft introduced by Europeans in the 15th century. Glass beads, made then primarily in Venice, were used as barter for the raw materials that Europeans desired. As glassmaking was not widespread in Africa the articles of fashion made from the beads were highly sought after and, in time, came to be called ‘trade beads,’ a de facto coin of the realm. 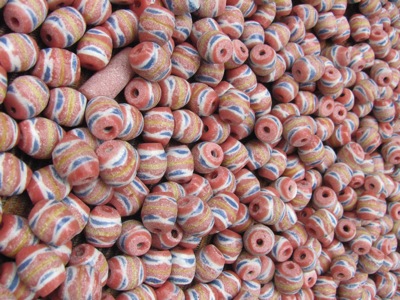 Trade beads were often swapped for slaves. You’ll also hear them referred to as ‘slave beads.’ Unlike some Westerners, contemporary artisans obviously find no dark irony in carrying on a craft meant initially to quantify the worth of a human being. And why should they? Like refusing to salt your fries because it too was once used to barter for slaves. 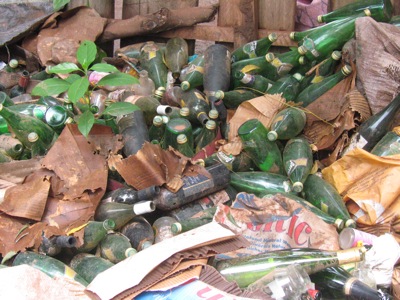 The “raw” materials for the bead-makers are discarded bottles. It’s a wonderful thing, really. At zero cost, the artisans collect up as much glass as they can (though, admittedly it is a bit tougher here than in the West because you can’t buy new bottles of soda, for instance, without returning an empty one). From trash to jewelry — can’t beat that product life-cycle.

The bottles are smashed. And smashed again. And again. Repeatedly until the glass is just a fine, pulverized powder. (Don’t inhale.) 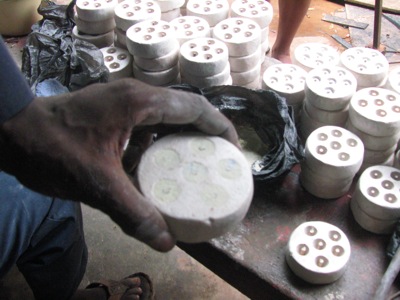 Once in powder form the glass is mixed with various dyes and filled into molds depending on the desired bead shape. Then, into hell’s oven for melting. 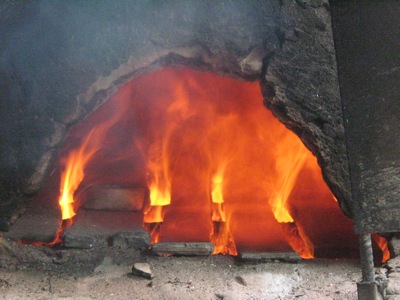 Typically the molds yield semi-circular halves which are then melted together to form spheres. They are then joined on a string, often with differently-colored beads, thanks to the central axle in the mold that preserves a hole through the bead. 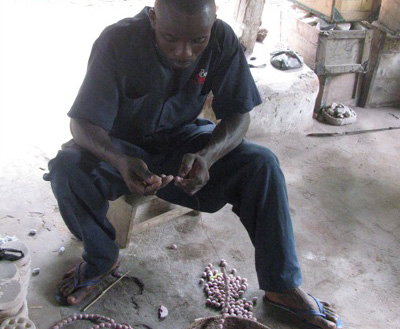