In Ghana I took a trip with Margaret to her mother’s home village of Tanoboase (tah·no·bo·AH·say). It’s dirt poor, centered around the local voodoo shrine, and governed by a chief — in other words, a microcosm of what makes Ghana unique, world’s away from the urban centers of Kumasi and Accra.

Tanoboase is a good example of a town that would seem to be able to pull itself up a level. It is on the main artery from Kumasi to Tamale and it stewards a stunning historical-natural eco-tourism project. It’s close to the Boabeng-Fiema nature sanctuary (teeming with monkeys treated as children of the local gods) and it is near an amazing set of waterfalls.

And yet, Tano (as it is called) hasn’t been able to capitalize on the tourist dollars that overflow to similar areas near the slave sites of Cape Coast. 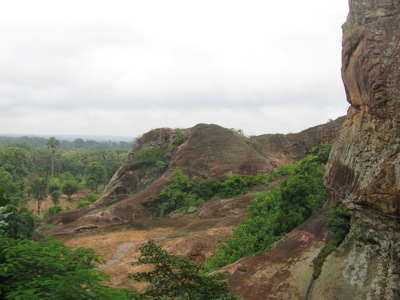 Boase means ‘under the rocks’ and the landscape up in this region is forest punctuated by crazily-shaped summits popping out from the trees. The form of the rock — caves, natural bridges, smoothed planes, boulders balancing on points — suggests some powerfully-erosive water flow through here eons ago.

This all makes for arresting views so it wasn’t a surprise to learn that there’s a Catholic (Benedictine, to be precise) monastery nestled into a nook. Kristo Boase is a quiet little operation of only about a dozen men (a convent is slated to open next year). Mostly it is prayer and agriculture in a secluded, inspirational setting. The monks don’t observe silence but the place is supernaturally silent. You’re as likely to hear a monkey screech as anything else.

One especially interesting point for me was a visit to the monastery’s cashew orchard. I’ve written previously about the fascinating biology of the blister nut, so imagine my delight at being able to see acres of them on the tree. They don’t just eat the cashews — no, this is a Catholic monastery: they distill the nuts into a potent liquor. 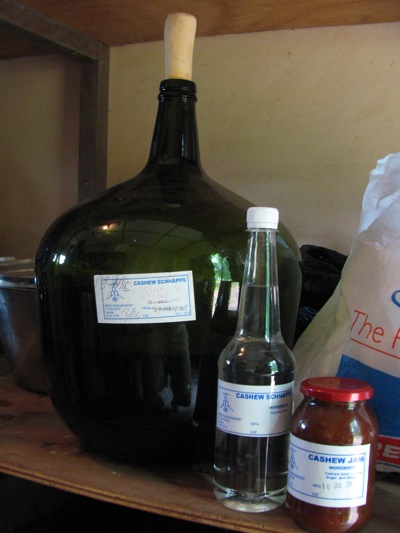 It’s cashew schnapps. And it is odious. But I bought a bottle, as well as cashew jam. I’m a supporter of the blister nut.

From Kristo Boase we headed a short distance into the town of Tano — and by town I mean about a half mile of variously-dilapidated structures hugging the Tamale road. This was Margaret’s true homecoming. She had not been back to visit in 25 years, but before we were all out of the car family came running up to greet. 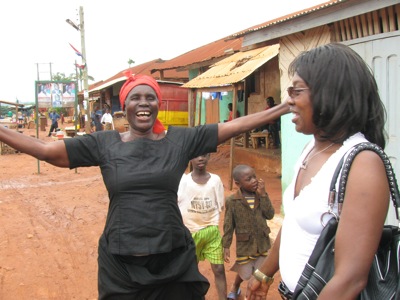 Margaret’s aunt herded us around from villager to villager. I couldn’t keep track of who was related and who wasn’t — but then, maybe that wasn’t even a distinction anyone made. It was as if the Chicagoan Margaret had just been up the road at the next village for a while.

Lots of furious chatting in Twi, lots of stares, but no one at all visibly perplexed at my radiant alabaster skin. I was with Margaret. 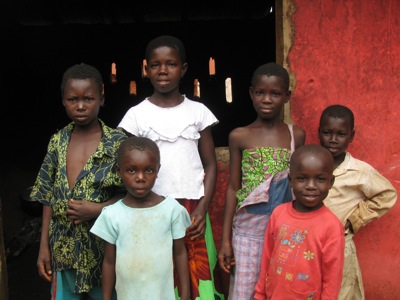 Tano’s two claims to fame — and sources of tourism, such as it exists — are the local voodoo shrine and the sacred grove, closely connected to one another. The shrine is an odd thing. It houses a dark room and a tabernacle-type bowl said to contain Taakora, head of the Akan nature gods. It’s run by a fetish priest and you’re allowed in for a small fee. Margaret would have none of it and insisted on staying outside the “evil” place. I had to go in, of course. Honestly I couldn’t see much — it was deliberately creepy and shadowy.

It’s remarkable how seemingly unfazed Ghanaians are by their overt, omnipresent displays of Christianity and their reverence for hyperlocal animist gods. Something like 70% of Ghanaians are Christian, with the remainder Muslim. Yet nearly all villages have some sort of local spirit who receives supplication and is the threat behind frequent curses being placed on people.

Margaret’s brother was cursed by a villager years ago for a perceived slight. Her family — singularly Christian — took no heed. Her brother later had surgery on his throat for some ailment that the villagers all took as proof of the fulfillment of the curse. Rather circular logic, but there it is. The simple fact is that most Ghanaians pray to a Christian God while respecting what they call “small gods.”

As is customary when visitors come to town we met with the local chief, the Tanoboasehene. He remembered Margaret too and even gave her a hug, which was odd since protocol requires you to speak to the chief through his assistant. Hugs apparently do not contradict the prohibition against addressing the chief directly.

Also a matter of custom is presenting the chief with a bottle of liquor, usually schnapps. (Hey hey, the blister nut saves the day!) A small quantity is then poured on the ground in remembrance of villagers past. Yes, this is precisely where the African-American “tradition” of “pouring one out for my homies” originated. You won’t be surprised to learn that in Tano it was done a bit more reverentially than in America. 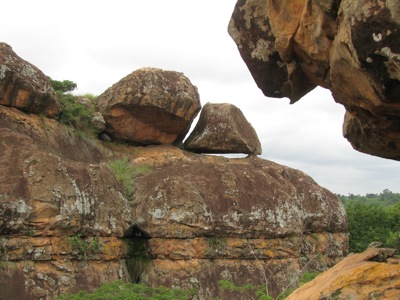 From the shrine you depart for the Tano Sacred Grove, the real home of Taakora as well as the site of the origin myth of the local Bono people. It is also the location of a last stand of local Akan during the tribal wars and slave raiding of 17th century.

The grove is certainly treated as sacred. Everything in it is protected (hence its eco-tourism designation) and there is a vaguely temple-like atmosphere walking in the semi-darkness of the vegetation and overhanging rocks. There’s myth and ritual at every turn. (Apparently virgins who enter the grove to fetch water will go blind.) It can be plain eerie.

Once you make it up the rocks and peer out across the tops of trees you realize that, religious or not, it is a rightful source of pride for the locals.

Margaret of course wanted to know what I made of all of it. She wanted to know how we could help jumpstart tourism, anything to help. I’m not an expert on tourism of course, much less rural African economic development, but it seems to me the problem is basically infrastructural. Getting to Tano is a chore, if not downright risky.

The “main artery” is barely paved and has lots of lethally-overloaded trucks traveling at incomprehensible speeds. Most tourists hug the coast, visiting Elmina, Cape Coast, and possible Kakum National Park. But there is a subset that ventures into the Ashanti inland empire and this would be Tano’s target group — if only they could get there.

The problem is the road. Open up the bandwidth and good things can happen. It’s the network economy of the industrial age: connectivity doesn’t just move stuff about, it multiplies the value of stuff. Without dependable physical access Tano can’t participate in the economic revitalization of the rest of the country. 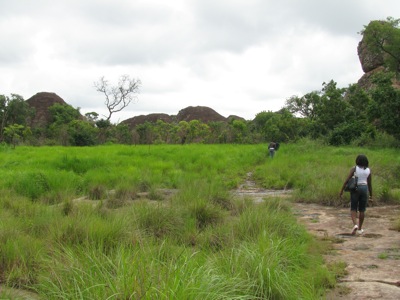 But Tano isn’t going anywhere. Like most villages cut off from the grid of urban services, they’re largely self-sufficient. And the Sacred Grove is obviously enduring and legally protected to stay that way. The road will come.