Few crafts are as closely linked with their place of production than kente cloth weaving is with Ghana. Tradition holds that five villages in the Ashanti region were declared official kente-weaving centers by the first king of Kumasi. Only two of these villages still produce the textile and of these Bonwire (pronounced bon-RAY) is the most famous.

The colored yarn is imported — a rare example of an international supply dependency in Ghanaian handicraft. This may be more a sign of market demand for the widest range of color and, as such, would be a positive thing, evidence of adaptability in an ancient form. 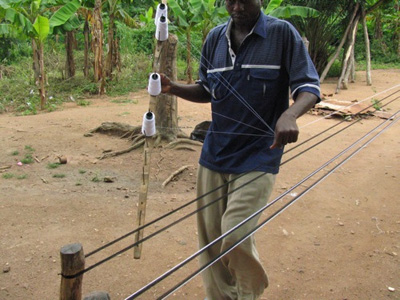 Before being placed on the loom, individually-colored yarn strands are reeded and warped in open outdoor spaces. This basically consists of mixing the colors together manually (by drawing out precise lengths then painstakingly intertwining separate colors) so that the weavers have the color elements pre-assembled when they insert it into the loom. It’s warp and weft sous-cheffing. 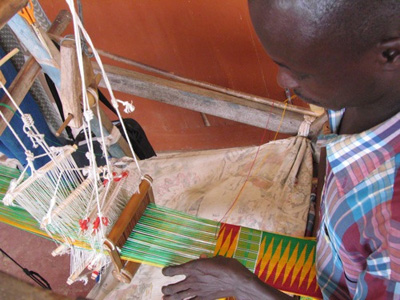 Though mass-produced kente can be churned out from automated looms, the traditional setup is a wooden box that fully engages the limbs of the operator. Feet press on make-shift pedals to raise and lower the separate planes of fabric (which form the kente background) while one hand flits the bobbin of thread in and out (which creates the actual design). The other hand variously adjusts the comb that pounds the new threads into place and a separator that gives the bobbin more room to work. It happens fast. 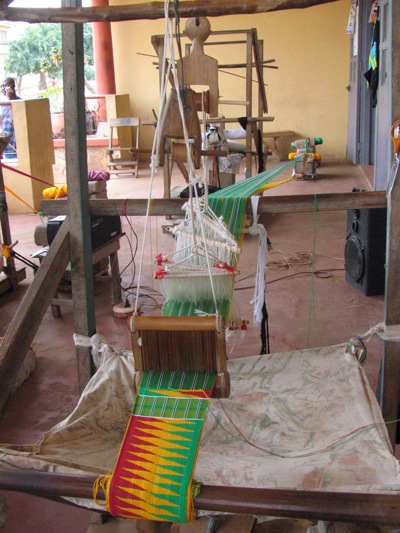 Men — and it is always men, traditionally — work at the looms side-by-side. There’s no talking, no singing, maybe a radio on, but basically just the hypnotic squeak and wooden clatter of the looms. Typically a single 8″ by 5′ section of kente takes a month or more to finish. Sections are sewn together and sold in larger pieces as traditional Ashanti tunics or for Western uses such as duvets and throws.

To come across a workshop in Bonwire is to enter a world of bold geometries and colors — a vibrant contrast to the matte earth tones of what is otherwise a fairly poor village.

There’s a cultural center outside of Bonwire that’s totally deserted. (It has a relatively clean toilet; we’ve stopped there twice.) Clearly this was the town’s attempt at capitalizing on its famed craftsmanship — but that plan seems to have run off the rails. If any craft village can become a tourist destination it is Bonwire. Our goal, in part, is to help Aid to Artisans figure out how to do this.