Today I mark one decade in the full-time employ of IBM. No, I don’t believe it either.

Back in 1998, as the go-go days of the first boom were about to go-go away, I was struggling between two job offers. IBM’s was low, a producer role at the relatively iconoclast Interactive Media group in Atlanta. The other, with a start-up consultancy called iXL, was much sexier, promising a higher salary and 10,000 options (oh, the promises).

To this day I don’t really know why I chose IBM. Might have been the I in the acronym — the suggestion of a career spent globetrotting and doing business in different cultures. Which is precisely what it turned out to be, though I’ve taken the jetsetting to some kind of perverse extreme. Being in Africa while marking this “anniversary” rather puts an exclamation point on it. 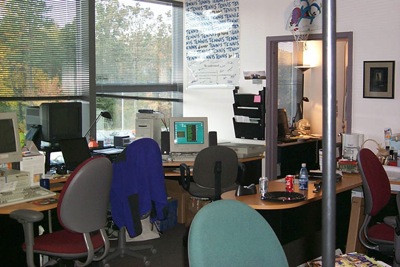 10 years is a completely arbitrary duration of time, but it does feel important somehow. More important than the extra week of vacation, that is. (Seriously, does anyone count vacation days anymore?)

I’d known since the beginning of the year that I wanted to use the anniversary as an evaluation point. And then the Corporate Service Corps opportunity came up I thought, what a perfect way to evaluate my career than to be yanked out of it for a month and plopped into a wholly unfamiliar environment.

With two weeks to go in Africa, I have no stunning insights to share as yet. I suppose if any do come it will be when I am back in the US and can reflect a bit. I do know what I miss and what I don’t (a future post, of course), but as for what I want to be when I grow up … still thinking firefighter, librarian, or World Dictator. Will let you know how it all turns out. (By the way, for those interested in what it is I actually do you can learn more here.)

So how did I celebrate this occasion? I waited until shortly after midnight last night, silently marked the anniversary, went over to the pool, and jumped in fully dressed. Seemed appropriate somehow.