Last weekend was ORD Camp, a Foo Camp-style “unconference” of creative nerds in and around and friends of Chicago.

You know how you can get lost in Wikipedia just jumping from one non sequitir article to the next? Yeah, it was like that. And it was 100% stimulating.

I had a one-on-one demo of how an industrial grade toilet flush works (think toilets in public buildings ). This came complete with a partially exposed flusher demo and an engineer who was totally passionate about his craft. And they all have such wonderful names. What I learned: if you want to destroy a building with these types of valves just evacuate all the air in the place. The valves work off of air pressure and without that the full force of the city water mains will come rushing in.

I heard from a fellow who had essentially reverse-engineered the Chicago Transit Authority bustracker data to create his own unofficial API. What I learned: There is GPS error introduced when buses hit the satellite-blocking skyscrapers downtown. Of course, hacking the CTA means you can do your own thing and adjust for the error. Pure awesome.

I met Rania El-Sorrogy, a recent De Paul grad, who has made a name from herself by designing a modular bookbinding system simply because she was so irritated at having to lug huge textbooks on her commute to class. Basically her system is an interlocking spine that lets you slide in and out sections of a book based on what you want to ready or carry. An example of the malleability of e-text infecting the tried-and-true form of the codex. What I learned: I was not a fraction as entrepreneurial or award-winning as Rania when I was in college.

I learned the basics of building a compiler for the ultra-high availability programming language called Erlang. Because, you know, that’ll come in handy at some point. What I learned: Some people like to do things (like, say, write web apps in a language completely hostile to doing so) precisely because they are insanely difficult. 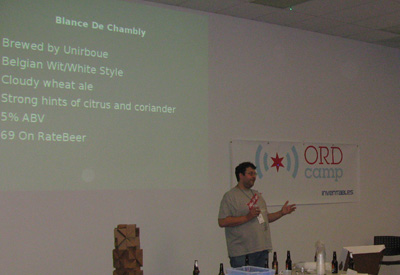 Session on homebrewing, with endless sampling

I heard Moshe Tamssot, a brilliant dude at Kraft talk about how he has made a career of infiltrating hugh companies and fostering an entrepreneurial creativity inside of them. Handy, especially when you’re moderating a panel on said topic at SXSW in a few weeks. What I learned: The best way to look like you know what you are talking about is to invite people who know what they are talking about to be on your panel.

I participated in a thought exercise about how we’d save America if we were the newly appointed federal CTO and we had $100 billion at our disposal. Basically we settled on overhauling the energy grid (for efficiency), our education system (specifically the ability of it to be nimble and responsive to a world that changes faster than institutionalized knowledge), and broadband (specifically getting it to everyone, stat). Sound familiar? What I learned: there’s a great deal that makes sense in acknowledging that outsourcing and the globalization mantra of seeking the lowest-cost source for your product or service is a futile race to the bottom. Eventually you’ll hit bottom: there’ll be no new countries whose underpaid workforce you can exploit. The solution: forget about people, go straight to the robots. The vision: thousands of 3D printers, miniature fab factories, and robots spread out in communities around the country that can make anything locally. Import and export reverts to raw materials only. A not altogether infeasible or undesirable future. (Did I just blow your mind?)

A great, stimulating weekend. Many thanks to Google and Inventables for orchestrating it all. Can’t wait for next year.