About a century separates the two Scientific American covers above. We’ve been talking about “smart” cities for a long time.

Maybe not in so many words, but the idea of designing a city to optimize it, to make it more efficient, to make its uses more intelligent far pre-dates digital technology. Sometimes the term is at the forefront of urban rhetoric and marketing — during election cycles or after natural disasters, for instance, or when new industry entrants smell a market opportunity. 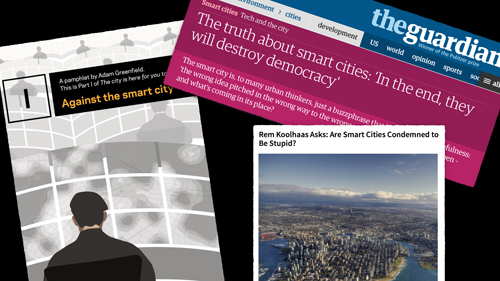 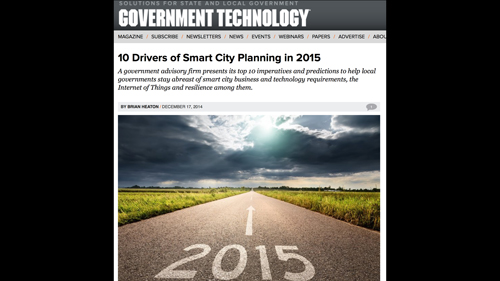 A more useful way to talk about smart cities might be to ask questions of a different type. What approach do they take? What is their philosophy of smartness? Who does it benefit in the long run? Below I describe some of these philosophies with design case studies. Though many of these examples are rooted historically, they are not necessarily linear in time — they overlap, circle back, and pop up dressed differently. 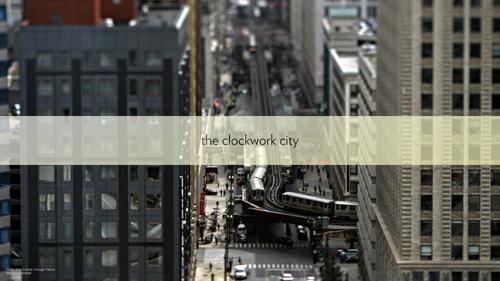 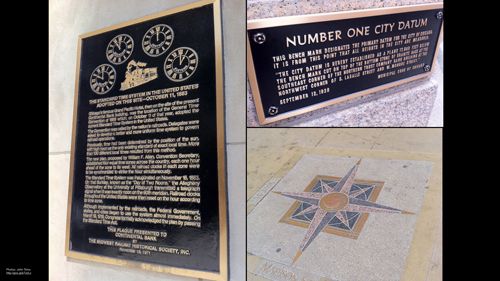 The clockwork city is the conception of metropolitan operations most familiar to people. It is an Enlightenment view of the city as a literal machine. One that can be measured, whose gears can be oiled, whose job it is to produce efficiency. It is an engineer’s view of what makes a city work. The city as sum of its infrastructure and services. 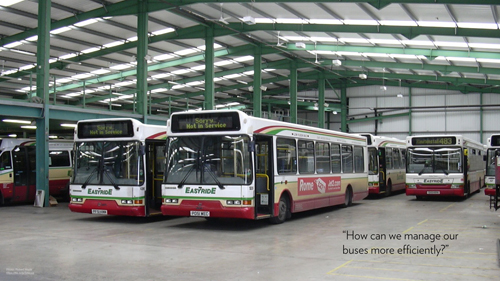 One way to understand the clockwork way of thinking is to use the example of public buses. A clockwork view poses the matter of buses as an exercise in operational performance: How can we manage our buses more efficiently? This of course has led to innovations such as timetables. It is an infrastructure-focused view that prioritizes the operator’s needs — essentially asking, in this example, how can we know when buses are supposed to be at a given stop? 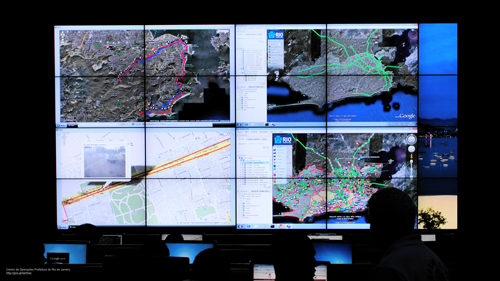 There’s nothing wrong with this operational approach, of course, and indeed it has dominated city management for a very long time. What’s useful is to note how this view is the singular focus of most modern “smart city” campaigns, especially with regards to how enterprise technology firms view the challenges in front of a city. Wanting to know where your buses should be is the seed that grows into citywide command centers powered by top-down, command-and-control technologies (such as the one pictured above in Rio). It has been called Dashboard Governance. 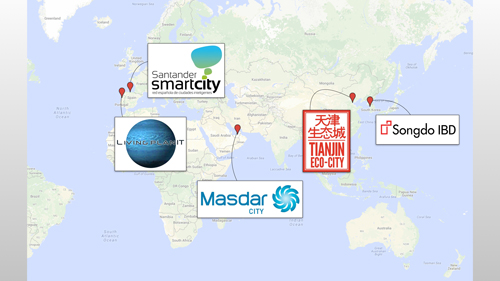 There have been many attempts at this kind of smart city. Most are developments from scratch or adjacent districts of established towns. Because ecological sustainability is in theory a more easily quantifiable axis of a city than, say, homelessness or income equality, energy is usually the centerpiece of these types of smart cities. Most have not lived up to their marketing. 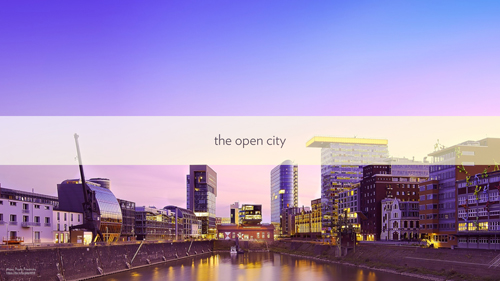 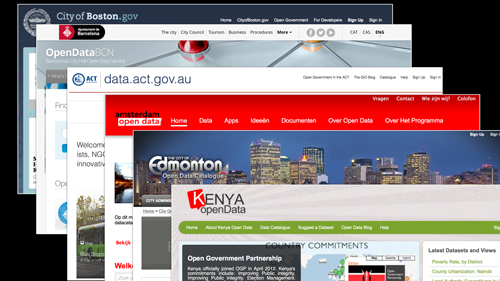 There’s a different philosophy of the smart city and it has been driven by the move in recent years to open up city data to the public. Initially undertaken as a political corrective to decades of opaque systems and hard-to-FOIA documents, the open data movement in cities has grown beyond transparency to cities that use it to enforce accountability in its workforce, to analyze patterns and trends for policy interventions, and even as a starting point for companies to add valuable services upon. Open data as economic development. 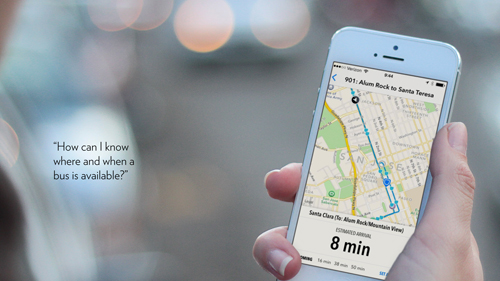 Using the bus analogy again, instead of the city telling commuters when a bus should be where, an open city approach to design let’s people ask: How can I know where and when a bus will be available? It may seem a subtle distinction, but the difference is enormous. The open city puts the user of the system — in this case the city-dweller — at the center. Decision-making control, if not operational control, of the system moves from inside government to outside. Examples of open city design from the civic tech movement are plentiful. Above, Foodborne Chicago uses public tweets (generated by people totally unconnected to the public health department) to determine whether an instance of food poisoning has occurred. 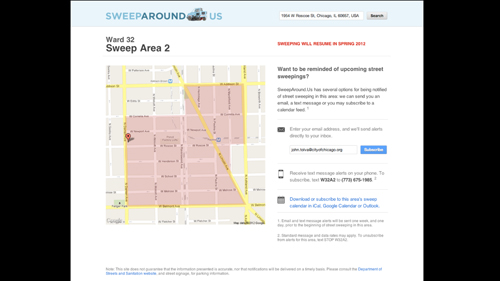 SweepAround.us takes somewhat inscrutable public data about when ticketing will be enforced for street cleaning and proactively alerts residents when they need to move their vehicles.

The open philosophy of the smart city above all focuses on making the city more legible; it isn’t necessarily about citizen-government interaction but about allowing those who live in cities to situate themselves at the center of systems — making sense from the vantage of their personal needs and uses. 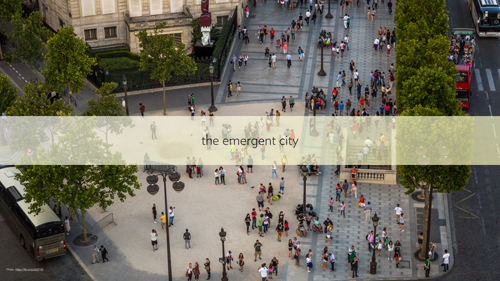 The newest perspective is what might be called the emergent city. In this framework initiatives are aimed at changing the underlying conditions that lead to a system’s functions, rather than the system itself. It takes the constituent pieces of the urban experience (whether run by the municipality or not) and joins them loosely through technology to generate different outcomes. 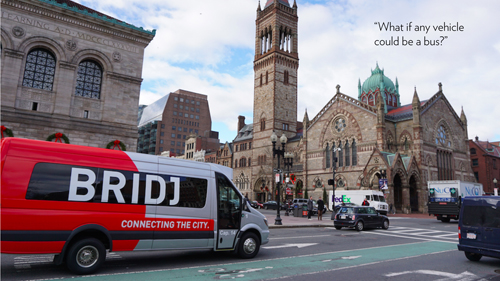 The bus example is again useful. An emergent approach, one that we might also call city-as-platform, asks not when or where a bus is, but rather “What if any vehicle could be a bus?” Typically cities address outcomes, in this case moving people around, but emergent city design seeks to change the initial parameters of a system and let complexity grow from that. 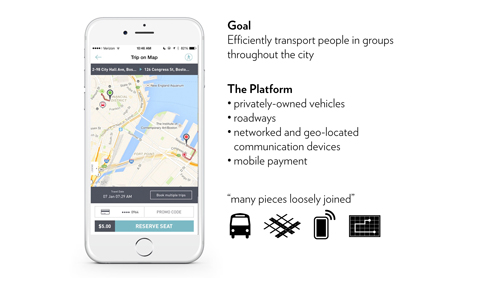 If the goal is to efficiently transport people in groups throughout the city, a centralized bus service is one way to do it. But thinking of mobility as a platform, we can also tally the constituent parts — here, privately-owned vehicles, roadways, networked personal devices, and mobile payment — and ask how they might be made to generate the same outcome as public buses. The example of the Boston company Bridj above is one effort at accomplishing this.

This isn’t about privatizing services so much as it is rethinking a city’s assets — public and private — when overlaid with network technologies. It’s the “sharing economy” with a civic bent: what happens when urbanism focuses on recombinant uses of space and infrastructure. A technologist might call it experimentation-as-a-service. 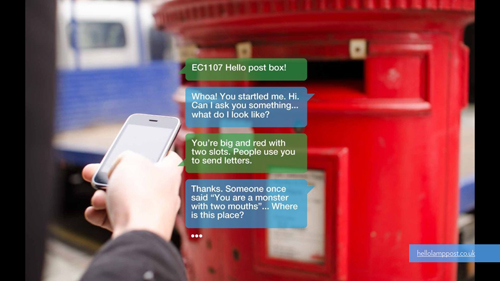 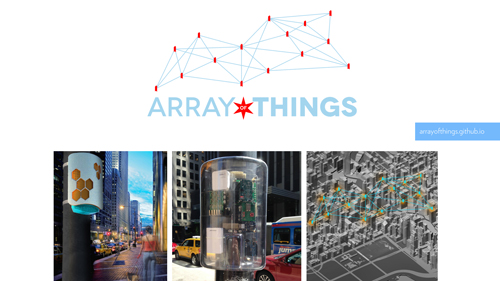 Projects such as Hello Lamp Post out of Bristol, England have this philosophy in mind as it uses street furniture to prompt local, place-based storytelling. The addition of network technologies to traditional aspects of the cityscape is what allows for the emergence of new uses of the city, new behaviors for its dwellers.

While IT companies push for Internet-aware devices (the “Internet of Things”) largely in the pursuit of operational (clockwork) efficiency, the networked city also offers the possibility of new bottom-up solutions. The Array of Things is a non-governmental project aimed at providing hyperlocal environmental data to whomever wants to use it. (One envisioned use case is to provide information about ice patches that have formed on sidewalks block-by-block.) In both examples, what’s different is that traditionally monolithic infrastructure is atomized and offered up for reuse. Hello Lamp Post and the Array of Things are not solutions to city challenges per se. They change the initial conditions of a system, allowing complexity and the creativity of the urban populace to make something from them.

It’s tempting to think of these three frameworks as evolutionary, one building upon the other. But they are not. There are aspects of all three consistently rubbing up against one another in most cities today. And it is difficult to categorically say that one view is better than another, for that distinction requires acknowledging who the approach benefits. Being smart about smart cities requires asking ourselves who is defining what smart is and who might be sidelined by that definition.