Art not ashamed to publish thy disease?

Twenty years ago I wrote a paper about the Internet. Let’s grade it.

1995. AOL, CompuServe, and Prodigy were the on-ramps to the Internet for most people. Geeks and university students surfed around via Telnet, FTP, Gopher and the still-new graphical web browser from the NCSA called Mosaic. Yahoo, Amazon, and Craigslist had just been born; Google was a year away. The Kindle was hard to even imagine.

I toiled in grad school, studying the cultural consequences of the spread of printing technology in England. But I was a computer nerd too and wholly smitten with hypertext, firstly the literary, non-networked variety you installed from floppies and then the new blue-underlined links on the World Wide Web. So I did what an unmarried, basically friendless grad student does on a topic of interest: I spent weeks working on a horribly convoluted, jargon-heavy paper about it. 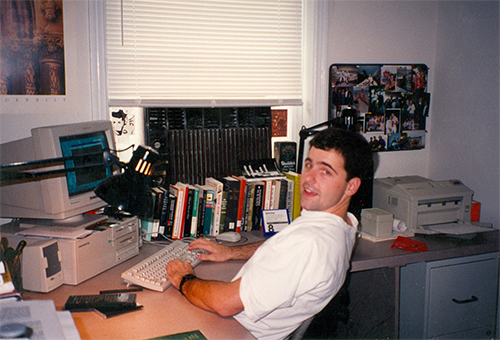 portrait of the author as a young nerd

The Heresy of Hypertext: Fear and Anxiety in the Late Age of Print was my embrace of electronic text and the nascent web. But that embrace was not really a discussion of the merits of hypertext. It was a critique of the critiques of the new medium — so very closed-loop and academia. In hindsight, a thoughtful analysis of what the Internet revolution might mean would have been way better, but then maybe I was presaging the web phenomenon of trolling the haters.

It’s painful to read, sodden with language from critical theory and words I made up out of whole cloth — “technoclasm”, “intraloquial”, what? — but I think I have managed to pull out the thread of argument. Let’s dissect and evaluate.

My starting position was that the printed word was on its way out. No timeframe, just that the slide was in progress. Probably seemed more radical in 1995 than I knew.

Despite exaggerated reports of its demise, the codex book is not dead — but, like handwriting in the age of print, it isn’t likely to remain the dominant means of textual dissemination. So the question is not if computers will transform our notion of reading and writing, but instead how?

True, in 2015 lots of books still get printed and read and, sure enough, newspapers are still around, but I think it is hard to argue that I got this one wrong. Though it is tough to quantify just how much reading takes place from a screen with the rise of higher-resolution displays, smartphones, and tablets, it seems obvious that the printed word has been toppled from its spot as Most Favored Medium. The question of what is being read or the quality of the print vs. online reading experience are other matters altogether, but I think this point has been proven over the last two decades.

So, on to the various anxieties I sought to shed light on:

[Critics fear] that the non-hierarchical interconnectedness of hypertext represents little more than textual totalitarianism, implicitly proscribing what can and can not by read by the existence of a pre-defined nexus of links.

It is certainly true that total access to information is not the same thing as knowledge, though that has always been the case. Instant access to basically any information has been shown to promote confirmation bias and to enshroud us in filter bubbles — and probably contributes to the aversion to long online reads.

The critics were right to be skeptical. Hypertext-linked information does not make us dumb, but it does seem to amplify some of our human tendencies toward intellectual laziness. I’d argue this does not outweigh the benefits of access to the breadth of information available on the web, but my breathless cheerleading for “radically egalitarian” electronic text seems a bit shortsighted so many years on.

Thankfully, this part holds up:

… the circulation dynamic of texts published on the Internet resembles the medieval and Renaissance practice of glossing, parodying, or otherwise altering a manuscript before passing it along. Slowly, though, the ubiquity and fixity of print have eradicated such practices, all but banishing the notion of a collaborative, “textually permeable” work. Now, the cult of the author and the printing press are inextricably linked; you can’t have one without the other. Digital text, however, requires neither. As a consequence, and much to the chagrin of political critics, no economic model has yet been devised to explain its production and propagation in a capitalist society.

I wasn’t really thinking about journalism at the time, but it is true that we have yet to see a really viable business model for words on the web. The printing press gave birth to more than our modern concepts of authorship and copyright; it created a giant business model that we still haven’t properly modified or turned our backs on.

… both Luddite and hacker agrees [sic — er, sic?] that a difference does exist. But if the same word inscribed on paper and displayed on a computer screen means the same thing — and how could it not? — then the only explanation is that we perceive a discrepancy, that the medium itself somehow affects how we think of the words.

Notwithstanding that the estate of Marshall McLuhan is probably owed royalties on that particular insight, it is obvious to nearly everyone now (as it was then) that there is an experiential difference between screen and paper. Reading on the Kindle most certainly does feel different than reading a book. Research has proven this to be the case with some concrete differences between paper and screen.

If I had an argument back then it was that this perceptual difference was not enough to dismiss electronic text as a medium altogether, which many critics did. I didn’t really back this up with anything, which may explain why I am not a college professor in 2015.

Anxiety #3: Electronic text, composed in graphical environments and often presented on screen intermixed with visual media, demeans the power of the word.

The upshot of critiques in this category is that words should be words, pictures should be pictures, and keep ’em separate. I cited hand-wringing over GUI-based word processing environments where “students who used word processors in the iconic environment of the Apple Macintosh wrote qualitatively and statistically inferior prose compared to students who composed on the text-based interface of IBM’s DOS machines”. That may or may not have been true then, but what’s interesting 20 years later is that, though we live firmly in graphical computer environments today, the pendulum for serious word processing has swung back, essentially acknowledging that visual distraction and excessive document customizability are at odds with serious writing. Programs like Scrivener and Ommwriter and entire window functions like OSX full-screen mode exist to address the problem of focus.

I did chuckle upon re-reading this passage:

[The] fear is not that future writers will revert to pictograms but rather that the traditional modes of textual composition that stress linearity, closure, and containment are being eroded from the inside out by the visually-based compositional aids themselves.

Turns out, the Internet in 2015 loves pictograms. I was being flippant back then, but with the ascendancy of emoji and the rebirth of animated GIFs it is hard to deny that word and picture are equal units of syntax in online writing.😐

The essay really says more about me than it does the Internet. If you can parse the byzantine prose you hear a kid full of excitement about a new medium, ready to make the jump from English grad school to Information Design. It was a thrilling time, though I’m left with nostalgia for a time when the web seemed so full of possibility and uncharted. It’s still a wilderness, but not for the right reasons.

The piece ends with this vignette:

In December of last year [1994], panic struck the Internet when rumor spread that a text-based computer virus was replicating its way across the globe and that it could be acquired simply by reading one’s electronic mail. For a while millions of people refused to approach their messages, afraid that the very act of reading would cause infection. We would do well to learn from this reaction, especially since the idea of a text-based virus was proven to be a practical impossibility; the rumor was a hoax. Indeed the rumor that the new medium of digital textuality will infect or corrupt our print-based practices is as baseless as the hysteria caused by the alleged virus. Human communication, like a living creature, has always adapted to tumultuous periods of change, surviving the “pathogenic” influence of speech, literacy, and moveable type, and no reason exists to think that it won’t adapt to the computer.

Viral infection from online reading was a joke in 1995 and for many years later (though many believed it was possible), but recently a bug was found to be exploitable in the Android operating system that allowed malicious code to take over a device simply by receiving a text message (technically MMS).

There’s still no need for panic; we adapt, as we always have. And that’s the argument of “The Heresy of Hypertext”, minus 3,806 words.