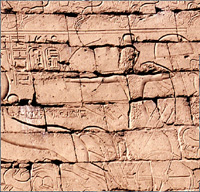 On the one major road in and out of the Cairo airport you pass a military academy and a giant, seemingly-deserted complex known as the Panorama of the October 1973 War. Cold War-era tanks and planes are mounted like museum pieces, but they come off more like scientific specimens — butterflies carefully pinned down for the curious. On the walls of the complex facing the road are murals depicting the conflict. They are garish and busy. The murals are meant to immortalize the victory of the Egyptian forces over the Israelis which ultimately resulted in the return of the Sinai peninsula to Egypt. The art is sort of like what you’d see on the cover of a war-theme comic book or a role-playing instruction manual. Thing is, historians usually call the conflict a military draw. The Egyptian Third Army was totally surrounded by the time a UN cease-fire was agreed to. OK, big deal.

What gave me a chuckle recently was returning to Luxor Temple. On the massive outermost set of pylons is carved the Battle of Kadesh. This was one hell of a fight, or is so described. Ramesses II from Egypt went at it with Muwatallis the Hittite with approximately 5000 chariots. Like Ramesses himself, visitors to Egypt can’t avoid the Battle of Kadesh. Depictions and descriptions of the battle can be found in no less than eight ancient sites in Egypt. Yet, some scholars wonder if the battle happened at all. And those who acknowledge that there was a battle usually assert that Egypt lost it.