Eternal Egypt on the High-Tech Texan 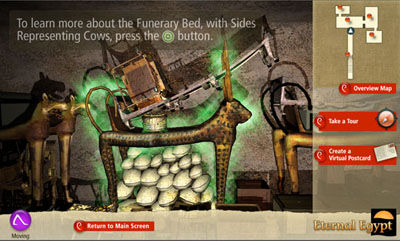 This Saturday at 12:30PM Central I will be interviewed as part of Michael Garfield’s High-Tech Texan show on Talk Radio 950 AM KPRC in Houston. The subject is the placement of the first Eternal Egypt kiosk at the Houston Museum of Natural Science as part of their Mummy: The Inside Story exhibit.

I’m tempted to scream “Am I the fourteenth caller!? Did I win!?” when I get on the line, but I’ll probably refrain. I will, however, be in New Orleans with no good (quiet) place to take the call so who knows what will happen.

The High-Tech Texan is streamed live for you Eternal Egypt junkies outside broadcast range.

Yesterday I was a guest speaker at my son’s school. Each week a new student becomes The Chosen One, he/she whose ego shall be inflated by week’s end. This was my son’s special week, so I volunteered to come talk to the class about my job, specifically about my work in Egypt. I figured that’d be more interesting to four-year-olds than, say, XML or Gantt charts.

Now, I’ve given presentations to CEO’s and government officials, to audiences skeptical and outright hostile, but I gotta say prepping for the preschoolers ranks right up there in terms of pre-show jitters. I mean, blowing a pitch to a client is one thing. Embarrassing your child the very first time you get a chance in front of his peers, that scars for life.

I now realize that talking about Ancient Egypt to a group of kids who don’t understand the concept of death is extremely difficult. How to explain the mummy? (“The wrappings keep the Egyptians cool when they take forever-naps.”) I did get a bit of a kick out of introducing the class to some of the Egyptian pantheon of gods, especially as this is a Catholic school. I had visions of the tots explaining to their parents that they learned about Osiris, Lord of the Dead, at school. Multiculturalism, kids. Teach the controversy.

At one point I introduced a finger puppet of a pharaoh. I explained that he was the leader of Egypt, that he wore a headdress that made him feel powerful like a lion, and that he ruled everything he could see with absolute power. At this point one of my son’s friends exclaimed “Just like President Bush!” No, I’m not kidding. I only wondered if he meant the puppet part or the absolute power part.

News from London. News from Egypt.

The latest from the UK shows just how cowardly terrorism is as an act. The image of a smoldering, confused would-be suicide bomber running out of a tube car looking for his partner — but you said it would blow me up — is simply pathetic. Too incompetent even to remove himself from the gene pool correctly. Terrorism is like any kind of media-borne meme. The more it spreads initially the more powerful it is. But there is a point at which it saturates and after fails to have the impact it once did. When horror turns to anger terrorism has failed. The problem is that terrorism is also a last-ditch effort, an act of desperation, and when people are desperate logic rarely works. It will take a long time for these cowards to realize that the initial power of their acts has long since dissipated.

I was thinking about why the London transit system, particularly the Underground, is such a target and I think the answer is fundamental to terrorism itself. Mass media of course is the accomplice of terrorism, the mechanism for global broadcast and amplification that allows a relatively small act to frighten millions. Terrorism succeeds or fails on this basic premise of small-to-large. The tube system is nothing but a physical network, the very embodiment of a vast, interconnected system where a small event ramifies outward until a much larger effect is achieved: total system shutdown. But there is a difference. Mass media is unidirectional; the tube is a true network. Media can only echo, amplify, send out. The tube — and all networks — adapts, re-routes, compensates. Human society is a network too and it adapts just like the tube does. Another lesson likely lost on the desperate.

And then Egypt. Beautiful, idyllic Sharm. When I was there in 2003 a shopkeeper ran after me on the boardwalk and begged me to come to his store. I thought he was just a pushy bazaar denizen, but when I got inside with my brother and co-worker he pulled out a book and showed us entries from people all over the world. He asked visitors to write something representative of their country, a kind of guestbook passport. He had dozens of European entries, but no American. It took me a moment, but I ended up writing the words to “Take My Out To The Ballgame.” The shopkeeper loved it and asked me to sing it. I’m no singer, but I didn’t care. I did my best. National pride, I guess. The shopkeeper shook my hand, hugged me, and sent us out with a massive smile. I have nothing but wonderful memories of Sharm. It cuts deeply to see the destruction there, like watching a gorgeous person senselessly disfigured. But there’s no fear, no terror. Only anger.

Eternal Egypt is Macromedia’s Showcase Site of the Day. Thanks, Macrodobe! (Remember when Cool Site of the Day was a must-visit web destination in the Netscape era?)

Might as well mention that the site also won a Webby Worthy award recently and, from a while back, a Best of the Web at Museums and the Web 2005. 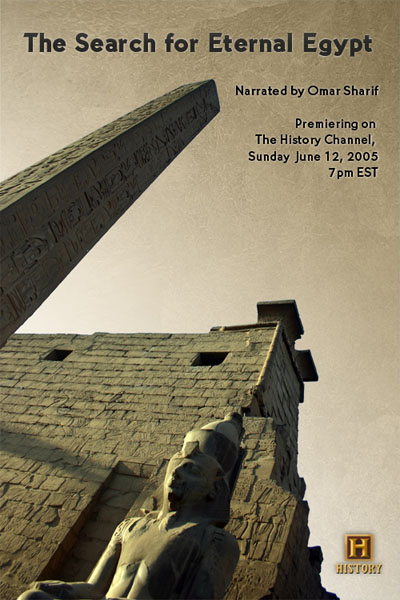 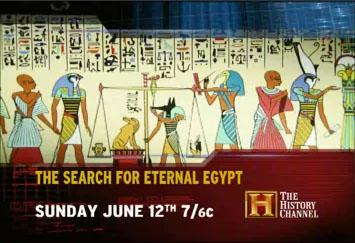 Horrible news from Cairo. A bomb was detonated near the Egyptian Museum today and, in a separate incident, tourists were attacked on a bus elsewhere in the city. This just a few weeks after a popular bazaar was bombed. I fear that the stunning tourism turnaround that Egypt achieved after the 1997 terrorist massacres is officially over.

Infuriating. Especially given the handle that Egyptian authorities seemed to have on security over the last few years.

Well, here’s a great surprise. Eternal Egypt is on the other side of “and the winner is …” for a Best of the Web award at Museums and the Web 2005 in Vancouver. The project received the accolade in the Best Innovative or Experimental Application category. Eternal Egypt joins a pretty distinguished group of sites, including the Theban Mapping Project (which still makes my jaw drop) and of course the venerable Hermitage project which garnered the overall Best of the Web award in 2000.

Congratulations to CultNat and the IBM team!

The Eternal Egypt project — long my primary focus at work — has just released a screensaver for PC. It is actually a functional app, cycling between three separate modes. It will run a loop similar to the splash screen on the website and will download images randomly from the site (with a running history and ability to send an e-card). My favorite, though, is the mode where it continuously traverses the spatialized relationship web known as Connections. You can do so manually straight from the screensaver too. Have fun!

The shoot continues and the levels of overlapping documentary going on are humorous. To start, the project is a documentary about the history of documentation and interpretation in Egypt (that is, Egyptology). Fittingly, today we videotaped the famous Seated Scribe statue being scanned in three dimensions by a laser shape-grabber. Of course people were snapping pictures of the videotaping. So let’s recap: photography of the videotaping of a scanner capturing a sculpture of a person writing. That’s about as far back as this meta-documentary hall of mirrors went. If I only I were blogging it in real-time.