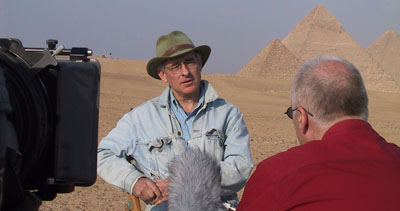 We interviewed Mark Lehner today. Along with Zahi Hawass and in addition to referring to the Great Pyramid as “quite a pile,” he’s most (recently) known for his discovery of the “workers’ village” (photos), the urban complex of the pyramid-builders at Giza. He’s a fascinating guy and, like Kent Weeks, wonderfully articulate about the importance of what he’s doing. You’ll have to wait for the documentary for the full scoop, but something he said today really made me think. He was explaining how astonishing the pyramids of the Fourth Dynasty are, given their precision and size. Importantly, he noted that no undertaking on their scale in the time it took to build them was ever duplicated in ancient Egypt. He then made a quick aside — I’ll bet it’ll end up on the cutting-room floor — that this burst of activity and innovation can be likened to the US space program’s accomplishments in the 1960’s. The implication is that we’ve not achieved anything comparable in the 35 years since we landed on the moon. Which, of course, is true as far as manned spaceflight goes.

But it got me thinking. There are many, many people who believe the only way to explain the Giza pyramids is to turn to supernatural forces, lost civilizations, or alien intervention. “Pyramidology” is an entire pseudo-science dedicated to these claims and there is no shortage of TV programming that laps it up. So I ask, if we are unable to get out of low-Earth orbit in the coming decades will the popular imagination begin to search for extra-human explanations as to how we accomplished the moon landings in the first place? That is, if enough time passes after a watershed technical achievement is it inevitable that humans will seek to explain its occurence in non-human terms? Certainly, there is a fringe that always does, but I wonder if technical singularlites like the Apollo program are doomed to mystification if not repeated. Can’t we just go to Mars and not find out?

Linguistic sidenote. The location producers here in Egypt are known as “fixers” and they are a three-person family team. They are extraordinarily good at what they do. They are also near-anagrams of one another: Romany, Ramy, and Mary. Wish I had thought of that with my kids.

One response to ““Quite a pile””