The Pavilion of Literary Profundity 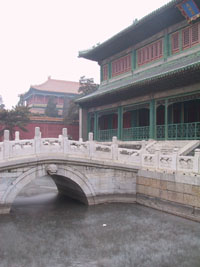 Now that’s the way to name a library! Or, more specifically, a book depository. We braved the bitter cold at the Forbidden City in Beijing for a unique tour of this Ming-era building deep inside the palace complex. It isn’t open to the public as it is still used as storage for what looked like textbooks and promotional materials. Dust clogged the air and draped everything; if I were alone it would have been exceptionally creepy.

The upper floors were empty — much of the original corpus is in the National Palace Museum in Taipei, but they offered close inspection of some fancy stacking technology. (Ever since reading Henry Petroski’s Book on the Bookshelf I’ve had a low-level interest in the technologies of physically storing books.) Each section in the stacks are composed of two-ply shelves. The top shelf is a grid, to allow ample airflow in and around the volumes and scrolls. A second shelf immediately underneath the first is filled with sand. In the event of fire, this shelf would burn through (the theory goes) and dump fire-extinguising sand onto the level below. Rather ingenious.

Those Ming and Qing certainly were committed to fire abatement. Some 300 bronze vats were spread throughout the grounds for ready access to water (heated by fire in winter to keep it liquid). Protection was sought symbolically as well. The roof of the Pavilion of Literary Profundity is colored black, an atypical choice in the Forbidden City, but one that connotes water in the Chinese spectrum. Dragons spew water at the corners of the building and a huge lighting rod and cable snakes across the spine of the roof into the ground. All combined, an admirable long-term data preservation strategy. (More photos at Flickr.)