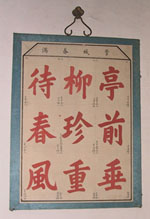 I can’t read Chinese, though I am able to at least distinguish it from Korean and Japanese scripts. (Cut me some slack, that’s progress! But don’t even ask about distinguishing Traditional from Simplified. I’ll have to be content in my ignorance on that one.) What this means is that, since I have no idea what idea is being conveyed, my growing love for Chinese characters is almost purely visual. A reverse ekphrasis, the strokes of even the most mundane lines are painterly, evocative of an artform more fully engaged with the space around it than Western writing. Chinese calligraphy, such as I have seen it, is more akin to dance or yoga than it is to other scribal arts. It is all very physical.

Consider the “calendar” in the image above. Called the 81 Days of Winter, it is a single phrase that evolves slowly over the course of the winter. Each day the author/painter adds one stroke to the characters; a total of 81 comprise all nine characters. Ticking off the days like an Advent calendar, the phrase is complete by the end of winter:

The weeping willow of the pavillion waits for the warm breath of spring.

But it isn’t just script that is spatialized.

The item on the left is called a Ruyi. Long ago it was an imperial backscratcher, but it eventually lost that function altogether and merely became a royal symbol. The item to the right is a spitoon shaped like a persimmon flower. Together they form a visual pun. The word “ruyi” also means (or sounds like) “whatever you wish” in Chinese. The word for persimmon also means “everything”. So, taken together, the two completely symbolic objects mean “everything you wish for”. You see these objects conspicuously placed together on furniture throughout the Forbidden City, a portmanteau resting amongst the other objects of daily life.