Last week Richard Gere bumped me off a phone call with the OneVoice crew. My ego was wounded, but, you know, I shook it off. Well, take that Mr. Gere. You got yours tonight on The Daily Show. 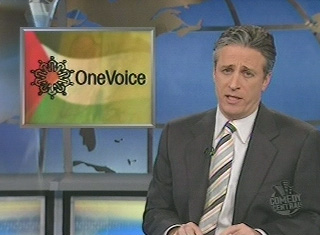 Gere’s been taking some heat for his presence in a get-out-the-vote PSA for the Palestinian elections, but I was pretty surprised to see Jon Stewart pick up on it. Surprised and pleased, I guess. The Daily Show’s got way more credibility than many mainstream media outlets these days.

So in the span of 24 hours OneVoice finds itself with an outspoken supporter newly elected in Palestine and has acheived the level of cultural currency conferred by a bit on The Daily Show. Time to get to work on the hard stuff.