First it was Ringu and The Ring, now Hollywood has remade Ju-On: The Grudge keeping only the subtitle. Both these movies are terrifying remakes of terrifying Japanese films. There’s no slashing, no crazed killer, no demonic possession, and few American horror genre clichés. Though neither movie is about technology per se, everyday items of technology are the primary means of effecting the kind of frights that I am coming to associate with Japanese horror filmmaking. For instance, both films use imaging technologies — photos, video, surveillance cameras, etc. — to convey that Something Is Very Wrong with the subjects of the shots. 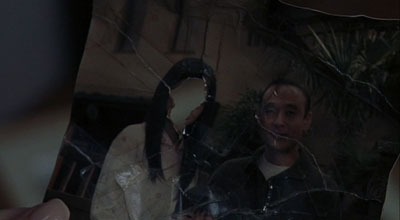 Photograph from The Grudge 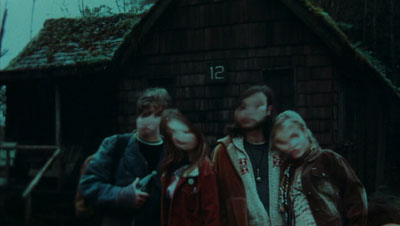 Photograph from The Ring

Phone calls figure prominently in both films too and, while this is not unique to Japanese horror, when you step back and look at how all technologies are used in the films it is clear that this level of remove — seeing the bad thing on a TV screen, hearing the bad voice on the phone, noticing the bad person in the background of a photo — are just contemporary versions of the old “spotting the killer standing behind you as you look in the mirror” trick. The fright comes from being one remove from the killer, having some kind of mediation between you and it, and knowing that that mediation offers a false sense of security. You still gonna die.

Maybe in the hyper-technologized culture of urban Japan this technology-as-mirror motif is the ultimate scare. Seems to be for me.