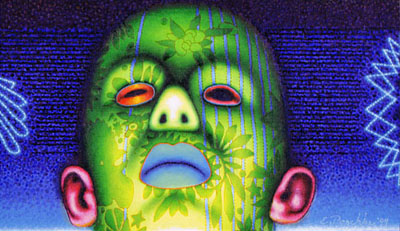 The artist Ed Paschke died in his sleep last Thanksgiving. I was introduced to his work in 2000 when some IBM colleagues suggested that he would make a good speaker at the opening of our new space. It was an interesting choice. Paschke was an avowed technophobe. He was fascinated with holography, though, and open to collaborating with computer designers. He agreed to speak at our opening. I remember him standing in a forest of displays on the dais, more avuncular than bohemian, a little bewildered at the sight of it all. He lent us one of his most stunning electronic pieces for a few months. It hung in our space and I secretly hoped his studio would forget that they had placed it there. They didn’t.

A memorial tribute exhibition to Paschke opened on Friday at the Maya Polsky Gallery. It runs until March 12.

In other news, another famous Chicagoan has left the building. Don’t let the door hit you on the way out, Sammy! (The security cameras are watching.)