Smell me a story 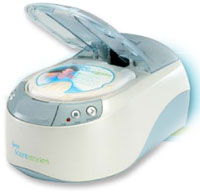 Febreze, makers of perfumey aerosols that I associate with covering up the stench of cat urine, have a pretty interesting product on the market. ScentStories is their attempt at creating narrative through smell alone. The ScentStories gizmo lets you pop in discs that contains five odor zones, each of which is wafted to you in sequence every half hour. As far as riveting narrative goes you’ll probably want to stick to other media, as the ScentStories are basically meant to calm you and/or put you to sleep. “Wandering barefoot on the shore” (well, of course having your shoes off creates a different smell), “relaxing in the hammock,” (I’m visualizing Homer Simpson) “shades of vanilla,” (sounds like a painting — talk about synaesthesia!) and so on. I wonder if there’ll be third-party discs to explore the full spectrum of stink? “Trip to the farm,” “trying not to touch the sleeping guy next to me on the subway,” and “discovering you used the last diaper two hours ago” — these would be fascinating explorations of stinktales.

Still, I think this is an interesting idea. Certainly narrative can be embedded in anything, the arc of a musical composition, the flow of a buildling facade. But visiting the Febreze website you get the sense that they don’t believe they can actually pull it off. The site is drenched in ethereal, blissed-out visuals. Don’t know what a walk on the beach smells like? Well look here. This is what it smells like. And their model is clearly musical. The wafter mechanism looks like a CD-player and they’ve recruited Shania Twain to “compose” a disc of scents. I think if anything ScentStories are to traditional beginning-middle-end narrative what ambient music is to, say, sonata form. I’d have called them ScentScenes, I suppose. More like an odor tableau than a linear experience.

But then, I haven’t tried this. And I’m really tempted. I wonder if I could purchase and play a disc without knowing which story I had. To smell the next chapter and declare “why, yes, I am exploring a mountain trail!” without having previously encountered a visual or tagline to set the scene for me psychologically would be the true test.

2 Responses to “Smell me a story”