“A turbulent zone of near-nothingness”

No, not my marriage — which is nine-years-old today, hooray! — but rather a description of the edge of the solar system which the spacecraft Voyager I has finally reached. Launched when the first Star Wars movie came out in 1977, this diehard explorer (and its twin) embody the best of NASA: trailblazing and science-oriented. If today’s NASA could regain that clarity of purpose we’d be so much better off than wondering how long we can keep a geriatric low-earth orbiting big rig from falling to pieces. 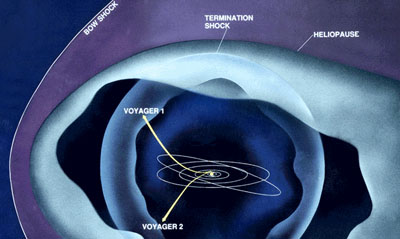 Voyager is truly alone now. Even the sun is just a pinprick of light. Here’s hoping someone — some thing — eventually encounters her golden cargo. Seeya, V’ger!