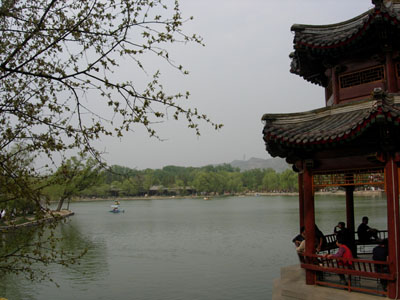 My colleagues and I made a 4-hour trek to Chengde today. A summer palace of the Qing-era emperors in the mountains northeast of Beijing, Chengde is now a secondary tourist destination. It’s distance from the capital is great enough that you avoid most of the Great Wall tourist fly-bys that clog Badaling. In fact, en route to Chengde you pass some lovely half-ruined sections of the wall (at Simatai, I believe). Problem is, the wall was as interesting as Chengde itself. I wasn’t all that impressed. The grounds of the summer resort verge on dilapidation and the palaces themselves — like those in the Forbidden City — could only be peered into from behind glass. The interiors, also as in Beijing, were dust-draped Imperial still lifes, static and moribund. The rooms felt like tombs to me. Still, the vastness of the resort was sublime and the pagoda-lined lakes lovely. Verdict: not worth 8 hours in the car.